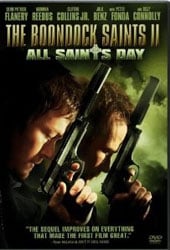 The Boondock Saints II: All Saint’s Day has become such a cult hit that Troy Duffy finally got to make his sequel….10 years later. He made this for the fans pretty much. The original movie wasn’t a hit from the start but over time became a huge cult classic among a dedicated fanbase. Now that the sequel is out, fans will either love it or think a sequel shouldn’t have been made in the first place. Me? I think it’s an entertaining flick that’s very flawed, just like the first movie. My advice is forget the hype, and expectations and should have fun with this one.

The movie starts off with a brutal murder of a priest that takes place in Boston. It’s meant to look like the Saints did it and to draw them back to Boston. The MacManus brothers and their Father have been living the quiet life in Ireland. Riding horses, farming, and looking like Jesus. The original policemen (Dolly, Greenly, Duffy) of the first movie are back, and getting nervous that the FBI is investigating the priest murder. Smecker’s protégé Special Agent Eunice Bloom (Julie Benz) is the head investigator on the case, the cops are nervous she might know they were aiding the Saints in the past. Meanwhile, Connor and Murphy find out what has happen and decide to head back to Boston. They dig up their old gear and head for Boston via freight boat while their Father stays behind. On the boat, they meet up with a Mexican fighter named Romeo (Clifton Collins, Jr.) and he wants to join up with them, and they eventually agree. The police and Agent Bloom think Concezio Yakavetta (Judd Nelson) is upset over his Father’s death and signs point to him that he’s the one behind everything. The brothers think the same thing so they go after Yakavetta’s crew again; only that’s not the case. Someone else is involved and wants the Saints killed along with their Father as well.

I originally wrote a movie review of this here. After seeing Saints II, I still liked the movie. I just don’t know if I liked it as much as the first time. The movie is extremely flawed and I would have done things a lot differently than what Troy Duffy has done. One of the reasons why I wanted to see a sequel was to see the Brothers fighting alongside their Dad and that simply wasn’t the case. We get more of a backstory to Noah (aka Il Duce), like some Godfather Part II rip-off. I would have liked to have kept his background a mystery.

The story and editing is a bit of a mess. It seems like they were making things up as they went along, which sounds like they were. The dream sequence with Rocco was written the day it was shot, and ended up being one of the best scenes in the movie. But some of the plot and things in the movie didn’t end up as good. The Roman and Il Duce plotline could have been ironed out, the plot holes involving the detectives could have been closed up. You see in the deleted scenes that they were balling their eyes out for Greenly. Eunice Bloom was also crying (a lot) which made it seemed like she was his wife or something. Way to over-act in that scene Benz. Speaking of her, while she’s a gorgeous woman, her accent sounds fake and annoying. I wish she just talked normal in this.

BUT with all the negative stuff I said, I still loved a lot of different scenes. Like the fantasy sequence with the Brothers and Romeo. It was a nice homage to 70s action flicks. I liked the scenes with Billy Connolly, and thought the 3 guys who played the detectives again did an absolute awesome job. Just stinks about Greenly but someone had to go. I liked all the different scenes with the Brothers killing the bad guys, and Bloom re-creating those scenes. Sure, it’s just like the first movie but that’s what made the first movie so cool. I loved the addition of Clifton Collins, Jr., and he filled the void nicely with Rocco gone.

The DVD extras contain deleted scenes, 2 separate audio commentaries, behind the scenes look at the movie, and an unedited interview between Troy Duffy and Billy Connolly. The deleted scenes is one scene I mentioned above, and another of Romeo playing chess with his Uncle. I wished there were more scenes, but I have a feeling there will be a director’s cut of the movie in the future. a 3 hour Boondock Saints sequel? Yeah, I can totally see Troy Duffy doing that. I liked the behind the scenes look, and was about 25 minutes long. Again, wished it was longer because there’s still some details I would have liked to have seen or know about. Like that huge elephant in the room, what did Sean Patrick Flanery do to his face? It’s distracting at first, but I wish he just didn’t do the plastic surgery until after the movie. It either looks like he kissed a bees nest or got into 10 drunken fights in the same night. Anyway, I didn’t really listen to the audio commentary, just listened here and there during some scenes. Just seemed like a bunch of dudes bullshitting.

Boondock Saints II: All Saint’s Day isn’t as good as the first movie but I don’t think it was ever going to live up to the original. It’s just hard to live up to all that hype built over 10 years. Look at Star Wars Episode 1? but then again, that’s a piece of shit. I really liked Boondock Saints II, it just has many problems and could have been better in a lot of areas. Just lower your expectations and have fun with it. And just like the first movie, this will probably get better over multiple viewings. “DING DONG MOTHER FUCKER, DING DONG!”