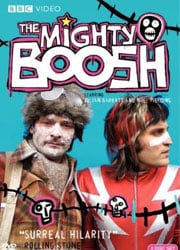 I have heard many different things (good and bad) regarding the cult British TV show The Mighty Boosh. What started out as a radio skit has developed over the years into a highly successful TV show across the pond. The boys from “The Boosh” also performed a live sold out tour across Ireland and the U.K.

So the signs that this is a great show are certainly there but that could be it, signs of brilliance, and signs of greatness. Finally, after debuting earlier this decade in the UK The Mighty Boosh finds itself making its DVD debut in the United States.

While initially watching the show I found myself asking what exactly I was watching, it was this weird episode with a particularly aggressive Kangaroo (not a real one, of course) having a boxing match with Howard. Howard and Vince are zookeepers in a zoo with a crazy American boss, and no real animals. Howard is secretly in love with a Mrs. Gideon, who has no idea who he is. It’s similar to Mr. Burns inability to remember who Homer Simpson is! Vince, the other main guy in the show is in love with his hair, and is the laid back one, compared to the usually stressed out, panicky Howard.

The show reminds me of a cross between old Doctor Who episodes, Monty Python and the classic children’s British TV show Worzel Gummidge (the latter of which, yours truly is a big fan). There are some quite surreal scenarios and storylines throughout the episodes, including some hilarious dance routines. It certainly will not be everyone’s cup of tea and will be downright irritating and annoying to those people. I’m reluctant to say that I enjoyed the show, but I didn’t hate it. In fact, I will watch more, i have a feeling it could be a grower.

So all in all I would say if you are a fan of British comedy, Surreal Sci-Fi, and Monty Python, give “The Mighty Boosh” a chance. You might (not) regret it!