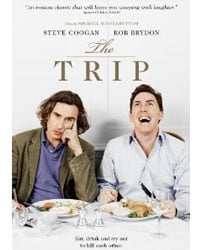 The Trip was a six episode BBC series that was made into a feature-length film as well. It was directed by Michael Winterbottom, and stars Steve Coogan and Rob Brydon. I’m not sure but this might be a sequel or follow-up to A Cock and Bull Story featuring the same actors and director. The Trip is a funny, dramatic, and a different kind of road trip movie that makes you want to get in the car, drive somewhere and torment your best friend.

In a somewhat fictionalized story, Steve Coogan is asked to write some restaurant reviews for the Observer newspaper, in trying to impress his foodie American girlfriend Mischa. She was supposed to go with him on the trip to Northern England, but she backs out and wants to take a break in their relationship. Mischa heads home to America, and Steve decides to still do the trip but invites his friend and actor Rob Brydon along. I guess you can say Coogan is friends with Brydon, but you wouldn’t think of it when watching this. The two constantly bicker like brothers, trying to one-up each other with impressions and telling each other how to act.

If you just watch the clips of the Trip, you would think this was a straight up comedy but when you see the material all together, it’s really more than that. It’s a drama with LOTS of funny scenes in it. I really think they couldn’t decide what they wanted this movie to be, and made two cuts of the series and movie. One that was dramatic, and one that was more zany and funny. The Trip is sort of a mockumentary road trip in a way.

The fictionalized version of Steve Coogan is a cynical, cranky comedic actor stuck in a rut professionally and personally. He has problems with his girlfriend/ex-girlfriend, missing his Son, and trying to find the right gigs as an actor. Meanwhile, Rob Brydon is content with his since he has a wife and a kid. What makes it funny is slowly seeing Steve Coogan want to kill Rob Brydon on this trip. Brydon does impression after impression and just gets under Steve’s skin. The dramatic stuff aside, I could just watch these two eat dinner all day long. The stuff that comes out of their minds and what they discuss in the restaurants or in the car is hysterical. You’ll hear impressions of Michael Caine, Liam Neeson, Al Pacino, Ian McKellen, Hugh Grant, Sean Connery and many more!

The special features of the DVD include a trailer, a making of, behind the scenes, and a whopping hour and 45 minutes of deleted scenes! I watched everything and just amazed how much was in the deleted scenes. The movie was a UK series so I knew some of that material would be left on the cutting room floor, but there’s obviously more than that. There’s one funny dance number called “Everybody’s a Cunt Sometimes” which was when Steve was dreaming. It’s pretty damn funny and Monty Python-ish. I was cracking up at all the takes they did when discussing those typical period/war movies. “We Rise, At Dawn…around 10ish” Many, many laugh out loud moments in the movie and the deleted scenes. If you really enjoyed the movie, definitely watch the deleted scenes as well because it’s practically a whole another movie.

The Trip is really funny when it wants to be, and dry the other times. It won’t be liked by all but people that really enjoy impressions, Steve Coogan and Rob Brydon, and British comedy should really watch this now if you haven’t already.

Features:
Trailer
Making Of
Behind The Scenes
Deleted Scenes