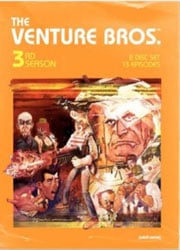 The funniest Adult Swim show has returned to DVD, and this time Blu-Ray. The third season of The Venture Bros was hilarious but sometimes the jokes were too inside. After watching the entire season again on DVD, I found this season a lot funnier the second time around…especially when everything is uncensored!

This season on the Venture Bros shows us how things started out, how things were and how those effects the current time the show takes place. The first episode, Monarch and Dr. Girlfriend are captured by the The Guild Tribunal and put on trial. There, you learn more about their mysterious past. After that, Dr. Venture is set to sell the compound because he’s going broke but Dr. Henry Killinger shows up out of nowhere and mischievously tries to make Venture into a villain. Other episodes in the season include Billy remembering his past, Dr Venture has a kid camp at the compound and Monarch tries to info on the compound, Dr. Venture reunites with his female friend in the jungle and the twins fall in love with her twin daughters, and Brock Samson gets his license to kill taken away, gets targeted and goes on the run. All in all, a very funny and random season of the Venture Bros.

Originally I felt the season was a disappointment but after a second viewing, I changed my mind. This season was hysterical, especially since it’s uncensored. You get lots of cursing and of course, some male nudity. Full frontal nudity might I add. Dr Venture’s Dad certainly likes to let everything hang out in the morning. That scene had me laughing out loud. I thought the series started out a little different, in that it centered around sub-characters and villains for the most part. Towards the middle of the center is when you get more standard Venture Bros episodes and I like those episodes the most. As much as I like watching The Monarch and Dr. Girlfriend, I felt they had too much screen time in the beginning of the season. I felt Dr. Orpheus should have been in this season more. The Alchemist is always fun to see on the show because Dana Snyder’s voice-over work is hilarious. The guy could read the phone book and I’d laugh.

The episodes were random at times, and didn’t seem like there was any flow to them. One episode, you’d get a great Venture Bros story, then you’d get some sub-characters story. I hope in the next season they have better storylines, and it flows better. Other than that, Season 3 was really funny but I don’t think it’s as good as the previous seasons. The DVD special features include commentary, and deleted scenes. If you own Seasons 1 and 2, be sure to check this one out as well.

Bottom Line: Not as good as the previous seasons but those are pretty hard to top!
Running Time: 286 mins
Rating: NR
Extras Rating:
Overall Rating: