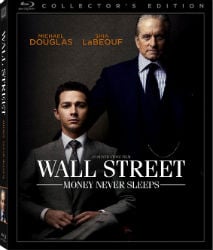 Gordon Gekko is back after what seems like an eternity from the first film. Oliver Stone returns to direct just as the economic downturn in the country was occurring. Shia LaBeouf and Carey Mulligan co-star as the real meats and potatoes of the film focus on what is big in the world of finance and how brokers are getting rich in new, even more confusing ways. Disappointed the film didn’t immediately focus on Gekko’s release in 2002, but ended up bringing the character back in the fold nicely, along with a great supporting cast.

When we last saw Gordon Gekko (Douglas,) it was the late 1980s and Gordon’s been sent away to Prison for various schemes while being a power broker on Wall Street in New York. Returning to life as he knows it is somewhat a shock as he is released in early 2002, but Stone fails to capture that as he quickly jumps 8 years in the future and Gekko is making the rounds on TV and campuses as he promotes his new book discussing his time as one of NYC’s biggest and brightest in the financial world. Shia LaBeouf plays Jake Moore, fiance of Gordon’s daughter Winnie (Mulligan) and someone that aspires to be as successful as Gekko once was. Seeking out some guidance and tips on handle his career with trying to break the next best thing on Wall Street, clean alternate energy & fuel, Jake reaches out to Gordon for help and a “trade” to be able to see his daughter. His daughter Winnie is none to pleased to have him back in her life, and Jake secretly chats with Gordon to try and smooth things over. Josh Brolin, Frank Langella and Susan Sarandon round out this great cast. Josh Brolin’s work for his character Bretton James was noticeable. James is a power hungry businessman who seemingly causes the demise of Keller Zabel, and eventually suicide of its owner who was a close mentor and friend of Jake. Jake is out for revenge and looks to Gekko to help bring James and his organization down.

Wall Street: Money Never Sleeps features some nice extras with great cast and crew insight into the film, the economy, and the world we live in now, compared to the world Gordon Gekko lived in back in the 80s. A nice little sit down with Oliver Stone and the cast discuss some of the above mentioned and how it’s different today. LaBeouf even mentioned that some of the guys he followed around while making the film are now in prison for insider trading. With “Money, Money, Money: The Rise and Fall of Wall Street” is a series of featurettes that look at how money can change a person and what they will do to have it. Like Gordon Gekko said famously in the first film ‘Greed is Good.” The vignettes feature a cut between the first and second films and a discussion about the trends during each. I really enjoyed the history of Wall Street and the significance of each street in the area down in Manhattan. In addition to those features, you can listen to the audio commentary from Director Oliver Stone for further insight into the film, as well as deleted and alternate scenes.

Wall Street: Money Never Sleeps was a slight disappointment due to the fact that I had an impression in mind as how I wanted to see Gordon Gekko interact with the outside world and his struggles to come back with nothing and see where it takes him. Jumping 8 years into the future, you start to see that slow build and eventual regain of power near the end of the film. Michael Douglas is just as powerful in this film as the first and you wanted even more this time around. He was a bit tamer and not as vindictive but that’s what prison will do to you. LaBeouf played a more advanced, skillful trader than Charlie Sheen did in the first film and with that, it was a bit confusing if you are not up on the Finance terminology and ideals. The film though was entertaining and still enjoyable to watch though.