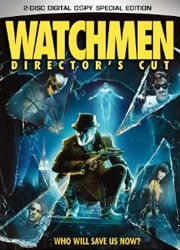 Everyone knows all the drama that happened when making this movie and all the delays that happened. I still didn’t feel like seeing it in the theaters though. All the commercials showed all this slow-motion crap that Snyder likes to do. Thankfully the movie isn’t all slow-motion and it’s actually a decent comic book movie. I liked Watchmen but it’s too long and boring at times.

“Watchmen” is based on the Alan Moore & Dave Gibbons comic book, and it’s the comic book “that changed comics.” The movie takes place in an alternate timeline, and features masked superheroes and vigilantes that form a group call the Minutemen back in the ‘30s. The group of superheroes finish the job police are too scared to do. Decades later, a second generation started another group called the Watchmen. Certain events are altered or affected because of the existence of superheroes like the Vietnam War. Nixon gets elected to a third term and by the 80s, has outlawed the superhero group. Only The Comedian, Rorschach and the god-like superhero Doctor Manhattan exist. When a fellow superhero is murdered, Rorschach tries to reassemble the group back together to find out who’s behind everything.

I enjoyed Watchmen and liked a lot of things about the movie. But I also had a lot of problems with it as well. We’ll start with the positives. Rorschach was bad ass and clearly the best thing about the film. The action was really cool, and I loved the soundtrack. Seeing Malin Akerman naked again in a movie is a nice bonus. She can’t seem to keep her clothes on in movies. The story is interesting, and I liked how this movie was more a character drama than a straight up comic book flick. Now with all that said, this movie isn’t perfect. If you thought the movie was long enough, wait ‘til you see Watchmen: the Director’s cut. 24 minutes have been added back into the movie, including more scenes with the original Nite Owl. The film is a little too long, and I think I would have cut out at least a half hour or so. Maybe just cut some Doctor Manhattan scenes?

Honestly, The Doctor Manhattan scenes were so boring to me. I don’t know if it was the character or Billy Crudup’s boring, monotone delivery that made me want to fall asleep for Doctor Dick’s scenes. Speaking of which, couldn’t the all powerful Doctor Manhattan created some underwear!? Why the hell must we see his blue junk the entire time? Sometimes he would be clothed but most of the time, we just had to see his blue dangly doodle waving in the wind. Another thing I didn’t like was the ending. It was all over the place, and I just didn’t like the result of it. Plus losing one of the best things about a movie sucked. It’s like killing off Luke Skywalker at the end of Star Wars or just a swift kick to the nuts. But my favorite scene (well besides the sex scene – yes I’m a perv) was the jail stuff with Nite Owl II, Silk Spectre II and Rorschach.

The movie is really long, but the extras aren’t. There’s maybe an hour of material that includes a featurette about the comic book, and then a series of web clips. Both featurettes were pretty good but in the end, something was still lacking. Something tells me there’s going to be endless amount of Watchmen Special Edition DVDs coming out in the future. The final extra of the DVD is a music video from Watchmen fans, My Chemical Romance doing a cover of Dylan’s “Desolation Road.”

Watchmen is enjoyable in doses but the film is way too long and definitely boring in spots. Who cares if Doctor Manhattan is on Mars and building something? I don’t! Give me a whole movie of Rorschach!