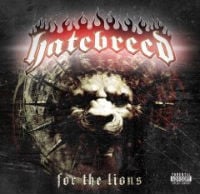 I’ve seen Hatebreed a lot over the last 20 years, whether it was the Hanover House, El En Gees, The Chance, The Birch Hill, The Palladium and many more venues across the North East. On this night, it would be a different experience as it wasn’t the usual dingy clubs or bars I caught the band in early on, but a unique experience in playing the Mohegan Sun Casino. The show was in the Wolf’s Den which are primarily free shows for casino patrons, all you have to do is wait in line and hope you don’t get cut off, and if you are a high roller you got VIP treatment.

Mohegan clearly had high hopes putting all their money on Black 13 with this show and it absolutely hit the jackpot. Frank, Chris, Matt, Wayne and Jamey came out no holds barred and unleashed a set that took the casino “To The Threshold”. Busting out deep cuts from earlier albums like “Smash Your Enemies,” “Empty Promises,” “Before Dishonor,” “Worlds Apart” while ripping through some more recent cuts like “Looking Down The Barrel of Today” made for a great experience to please fans from all levels. Believe it or not, the free show attracted some newcomers as well as people who’ve been following the band for over 20 years.

There were some moments where Jasta urged the crowd to pay it forward after telling a heart-warming story of how Vinnie Paul would always go out of his way for the band when they played his hometown before launching into “Last Breath.” The energy of the crowd was great as they busted out other tunes like “Defeatist,” “A Call For Blood,” “Honor Never Dies,” “Perseverance” and more. Jasta pointed out it’s the 15 year anniversary of ‘Rise Of Brutality’ with “Tear It Down,” “Live For This” and the crushingly heavy “Doomsayer.” This set wasn’t without the other classics as they dove into the self-titled effort with “Everyone Bleeds Now” and “In Ashes They Shall Reap.”

Loved @hatebreedofficial tonight @mohegansun I believe this is the 16th or 17th time seeing them over 20 years strong! #hatebreed #hardcore #Metal

Closing out the set were band staples like “Destroy Everything” and “I Will Be Heard,” and they certainly were. Very happy Mohegan Sun took a chance booking Hatebreed, for a fantastic performance. I do want to point out that as many shows I personally have been to, one thing that sets Hatebreed is that in an era where set lists can be spoiled or highly predictable, Hatebreed changes it up constantly, and this is something other bands should learn from, creating unique experiences that will keep your fans coming back, year after year.