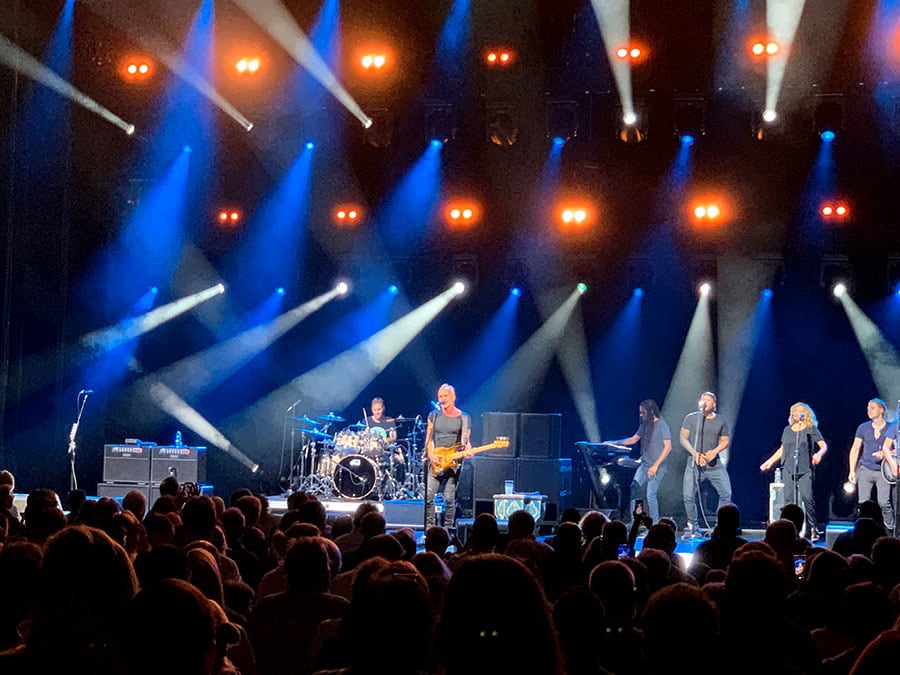 Based on his onstage presence, I’m guessing that Sting is a truly fun person to be around. Unlucky me, then, that my first ever experience of him was seeing his acting performance as Feyd Rautha in “Dune” when I was a kid (which, if you’ve never seen it, is truly creepy). I had no idea that he sang, nor that the joy and verve he exhibited during his shows were so incredibly contagious to so many.

Sting, on his “My Songs” tour—named for his recent album of reinterpretations of his own hits—is giving audiences nearly two hours of top-quality entertainment that entails a look back at his work with the Police as well as his solo work. The artist just concluded a three-night stint at the Wolf Trap in Virginia, and Night 2 saw many audience members who were there the previous evening—gleefully back to check out the musician from Newcastle, England, do what he does best.

Tuesday evening’s show began with a half-hour of music from Joe Sumner, whose pop Gordon (aka Sting) headlined. The younger Sumner was backed by a rather talented quartet, and the five together played Sumner’s own compositions. The 42-year-old showed that charges of nepotism aside, he possesses no small amount of musical chops—even if his closing song, “Jelly Bean,” is more than a bit of a head-scratcher in terms of saccharine material and arrangements.

When it was Sting’s turn, he hopped to center stage and immediately kicked things off right with “Message in a Bottle” from his time with the Police. It was a spirited rendition of the radio staple, and Sting’s vocals were as in the pocket as was his guitar-playing. No one was seated. 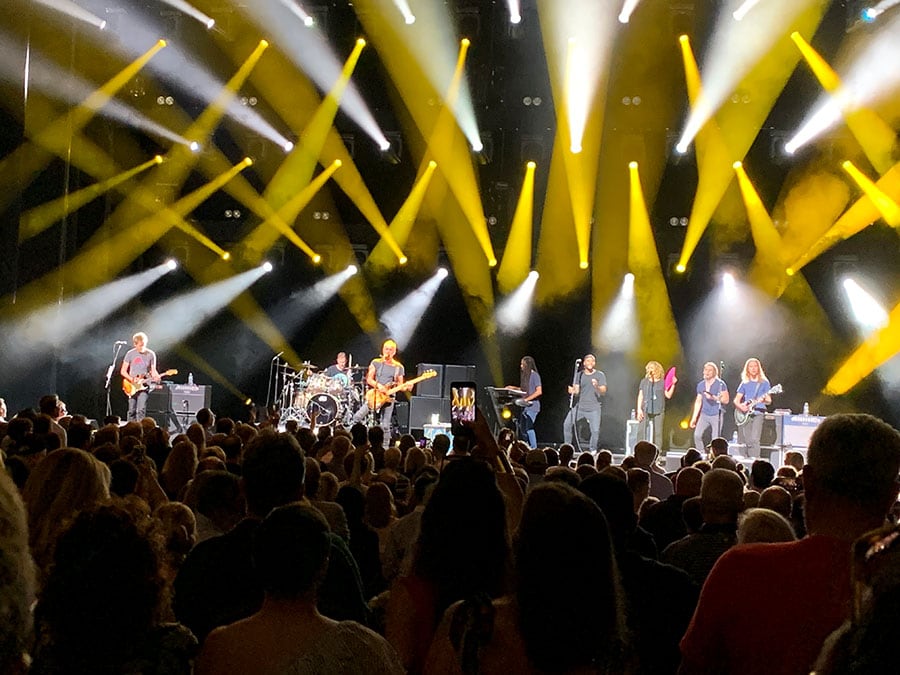 A high-energy rendition of “If I Ever Lose My Faith in You” was up next, followed by “Englishman in New York,” with which my British-born fiancee excitedly sang along. (On a side note, and I couldn’t make this up if I tried, she has a business trip to New York this week.)

The crowd was by and large of a certain age, but the smell of alcohol and another unmistakable aroma kept most everyone jumping and clapping. Even a woman seated to our left, who appeared to have some issues with standing, was on her feet for most of the crowd-pleasers later in the show, and wore a smile the entire time.

Sting kept the crowd in his palm, with most of the gathered standing even during some of the slower tunes like “If You Love Somebody Set Them Free” and “Brand New Day”—although the latter featured a lively harmonica accompaniment by Shane Sage.

The British singer had great praise for his backup musicians and introduced each in turn during an early set break. He took special pleasure in calling out longtime guitarist Dominic Miller as well as his son Rufus Miller. Sting jested that, at 67, of course he has two generations of the same family playing for him. And backup singer Gene Noble proved he was worth every penny with soulful solo vocal work later in the show as well.

Sting seemed to know how to program his shows for proper emotional modulation, as the slower “Seven Days” got folks back in their seats, and there they largely stayed, but with attention no less than rapt, for “Fields of Gold,” which was one of the evening’s absolute highlights.

Those who hoped for more Police iterations needn’t have worried as “Wrapped Around Your Finger,” “Walking on the Moon” and “So Lonely” were on the setlist, with Sting showing off his still-golden tenor range on the high notes of “So Lonely.” 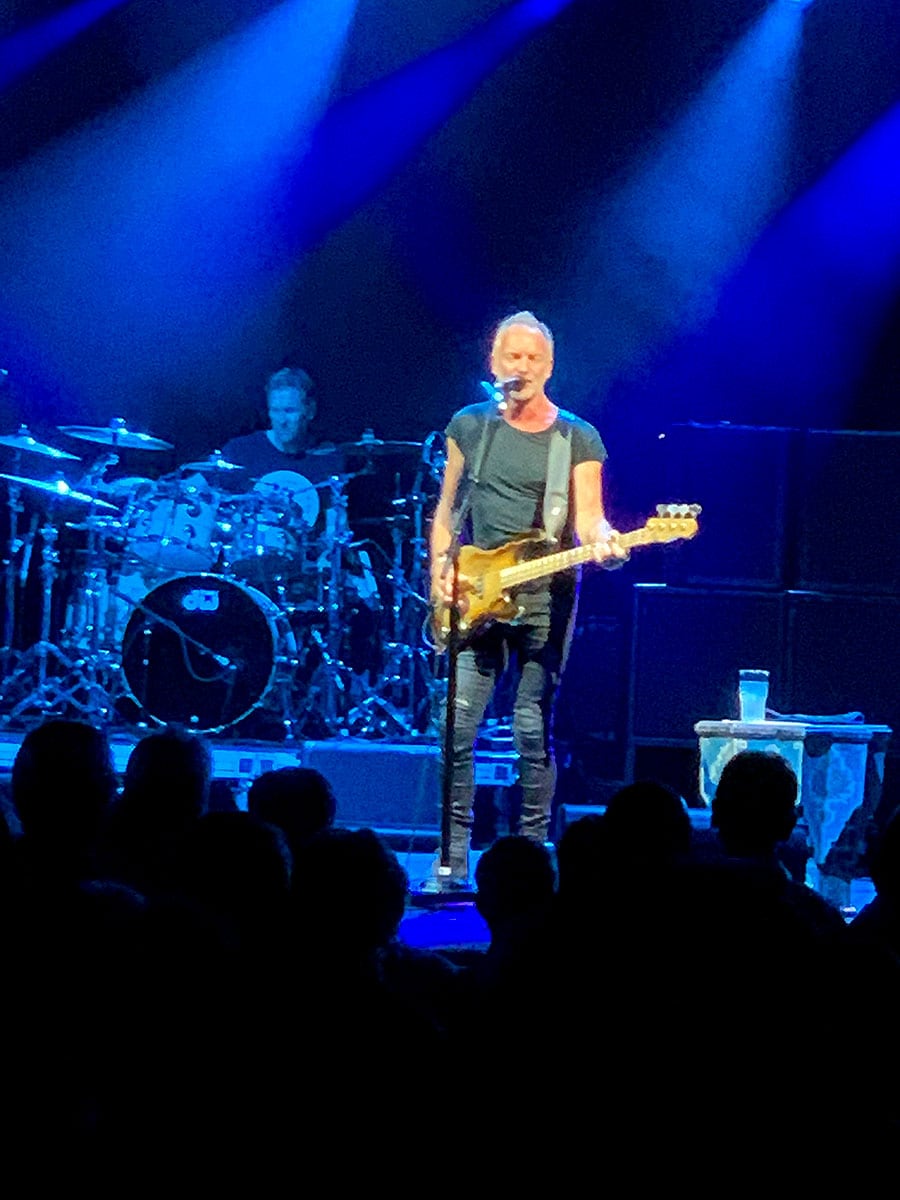 Of course, no modern-day Sting show is complete without “Desert Rose” from 1999’s “Brand New Day.” It’s a song I’ve never quite warmed to on recordings, but it played rather well Tuesday, especially with Sting mastering the melismatics of the “Ya lili ah ya leel” refrain, but also with his backup band providing ample musical support on the dreamy composition.

The stage lights then went red, which could mean only one thing: a tale of a certain lady of the evening named Roxanne. Its vocal melody line is a challenge even at the best of times, but Sting stuck both takeoff and landing of the higher notes with ease. Thereafter it was time for “Every Breath You Take,” which remains the most romantic song ever written from a stalker’s point of view—and arguably one of the most misunderstood popular tunes out there. Sting and his entire band then took a bow and hopped offstage.

For the encore it was time for more Police favorites “King of Pain” and “Next to You.” The gentleman next to me was really hoping for “Don’t Stand So Close to Me,” but when Sting and company returned for their second encore, the frontman said that he always liked to leave his audiences with something quiet to mull over on their way home. (Sorry, happy but disappointed dude next to me.)

And so on to the moving “Fragile,” with its repeated admonition that we must always recall “how fragile we are.”

With no other fanfare, Sting saluted the crowd one final time and was off. He still has many stops left on the “My Songs” tour, which will take up residency in Las Vegas next year with what he told the crowd would be no small amount of special effects and stage theatrics. But his songs don’t require that much ornamentation. They can stand on their own, just as they have for years.