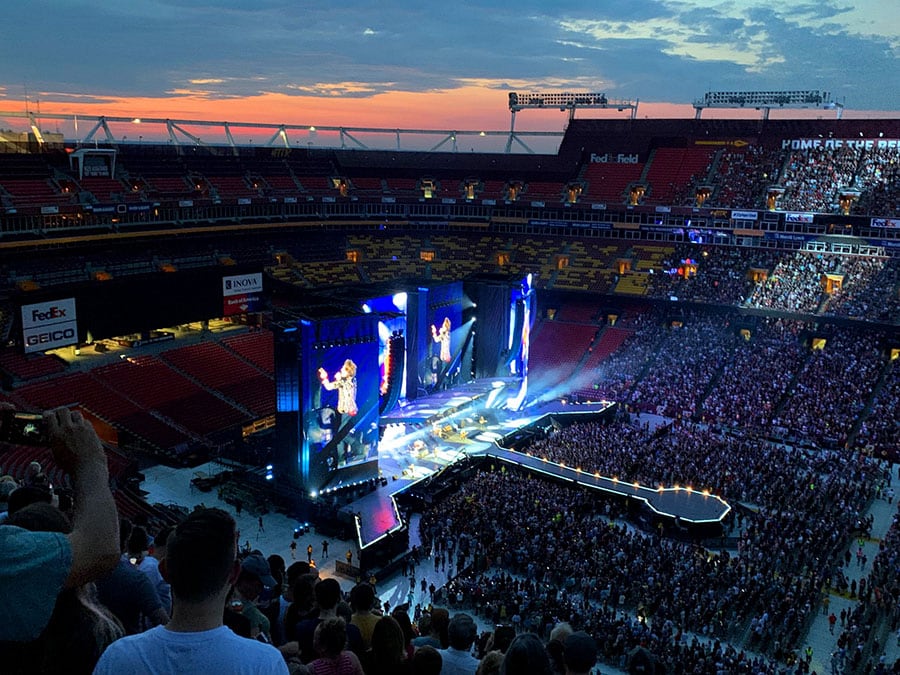 Whatever advice Mick Jagger’s doctors gave him following the 75-year-old great-grandfather’s recent heart surgery, it likely did not include continuing to get up in front of tens of thousands of fans and jump about the stage as if he were still a teenager.

Yet that is precisely what Jagger and his bandmates in the Rolling Stones did—and how—in their two-hour showcase at FedExField in the D.C. suburb of Landover, Maryland, Wednesday evening. If “Sir Mick” was any the worse for wear following the medical procedure that caused this show—as well as all of their other U.S. dates—to be postponed by over a month, it was never on display. 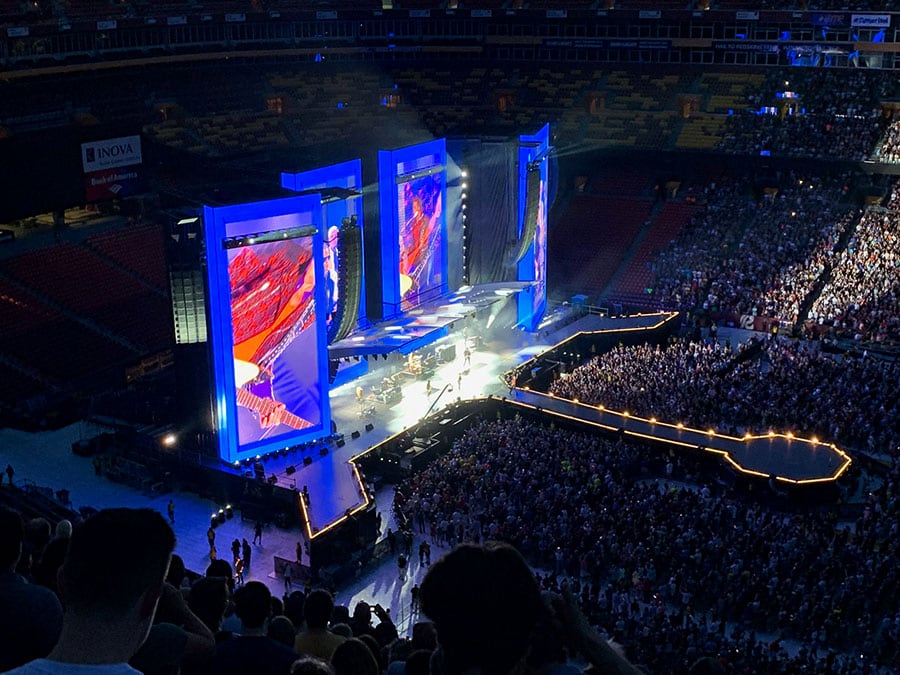 This was my sixth outing to see the Stones over a 22-year stretch, and I’ve skipped the past few tours partly due to cost and partly because, well, can it still be the same? Will they (can they????) still bring their A-games, or has it all just become a cynical money-grab. When the U.S. dates of the “No Filter” tour were announced last year, I said OK, “one last time” (precisely what I said at least the last three times).

It appears I needn’t have worried.

After a thoroughly vivifying opening set by the Pittsburgh blues band Ghost Hounds, the house lights darkened as various permutations of the Stones long-lived Tongue logo flicked across three enormous digital screens before a simple announcement from the loudspeakers: “Ladies and gentlemen, the Rolling Stones.”

Lights up, the four septuagenarians and their backup musicians strolled out like they owned the joint, and tens of thousands of fans from the very young to the decidedly otherwise leapt to their feet as Keith Richards strummed the opening chords of “Jumpin’ Jack Flash” and its crossfire hurricane. (Rain had been in the forecast but thankfully held off.) Jagger’s vocals were as on-pitch as ever, and the Stones staple was brought to life amid the humidity with the ever-steady Charlie Watts on drums and “new guy” Ronnie Wood on rhythm guitar—the core lineup of the band since the early-’90s. 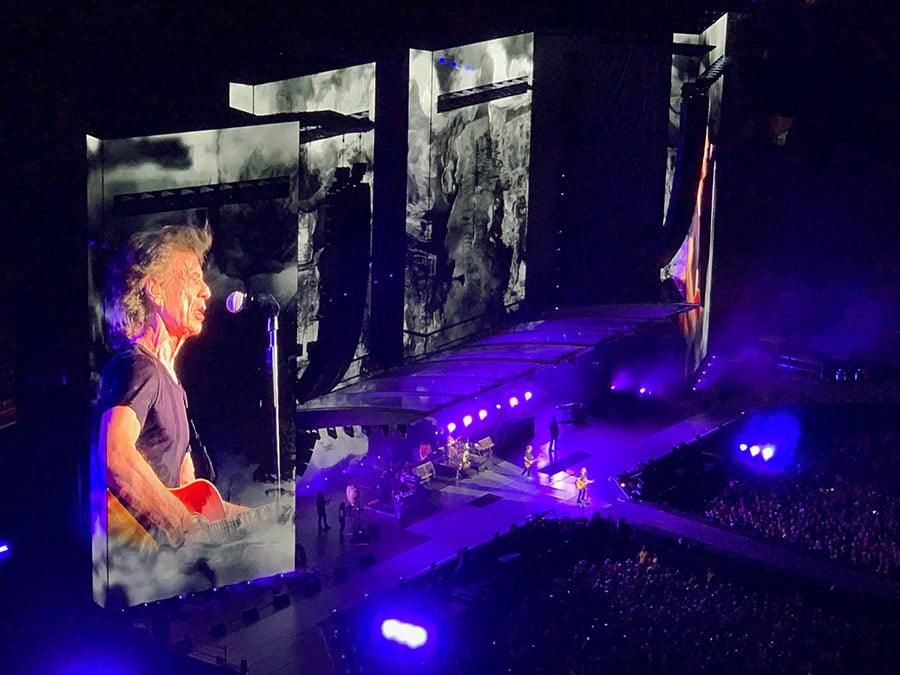 Questions about Jagger’s physicality were instantly quashed, though there was an awkward moment early on when he bade the crowd welcome and said how happy the band was to return to “the DM,” an odd mixture of D.C./Maryland or two-thirds of “the DMV” encompassing Virginia to the south. Amused and/or confused looks were exchanged all around, but then it was off to the races for “It’s Only Rock ‘n’ Roll (But I Like It)” and “Tumbling Dice,” followed by “You Got Me Rocking” from the 1994 record “Voodoo Lounge”—their first album with bassist Darryl Jones, who, aftering replacing retiring original Stone Bill Wyman, has been with the group ever since. (An outstanding documentary about Wyman called “The Quiet One” is currently making the rounds of the festival circuit.)

The Stones’ catalogue is so extensive that invariably one or two songs will be trotted out that haven’t seen the light of darkened stage in a while, and for the Maryland show, that hidden gem was a cover of “Mercy, Mercy” by Don Covay & the Goodtimers, which Jagger announced hadn’t been played live by the band since July 5, 1969—just two days shy of a 50-year gap. This was followed by a social media polling request for “Rocks Off,” which segued into a slowed-down, though no less lively, rendition of “You Can’t Always Get What You Want.”

The core quartet then walked from mainstage and down a gangway to a smaller circular stage (from the nosebleeds where I sat, the entire setup resembled a Klingon Bird of Prey), which is nothing new for a Stones show. But what was different this time was the mini-set at mid-crowd was entirely acoustic, with Jagger even joining his mates on acoustic guitar for “Angie” and “Let It Bleed.”

Then back to the main stage, where the entire backup section rejoined the quartet for “Sympathy for the Devil” and “Honky Tonk Women.”

As this was roughly the halfway mark, Jagger then trotted out the traditional introductions of the musicians, including keyboard maestro Chuck Leavell, who, in addition to his work with the Stones, was prominently featured on Eric Clapton’s seminal “Unplugged” album. (This was also the only time in the evening where the frontman got political, japing unsubtly at President Trump’s Fourth of July military parade just 15 miles to the southwest. This elicited a stadium full of boos—either at Trump or Jagger, though most likely the former.)

Applause and cheers were proportional to name recognition and longevity with the band, with Jones, the “senior” member of the backup gang, getting his due respect before Jagger rattled off as many adjectives as possible to introduce both Watts and Wood. (Wood replaced Mick Taylor in the ’70s, who himself replaced the late Brian Jones.) 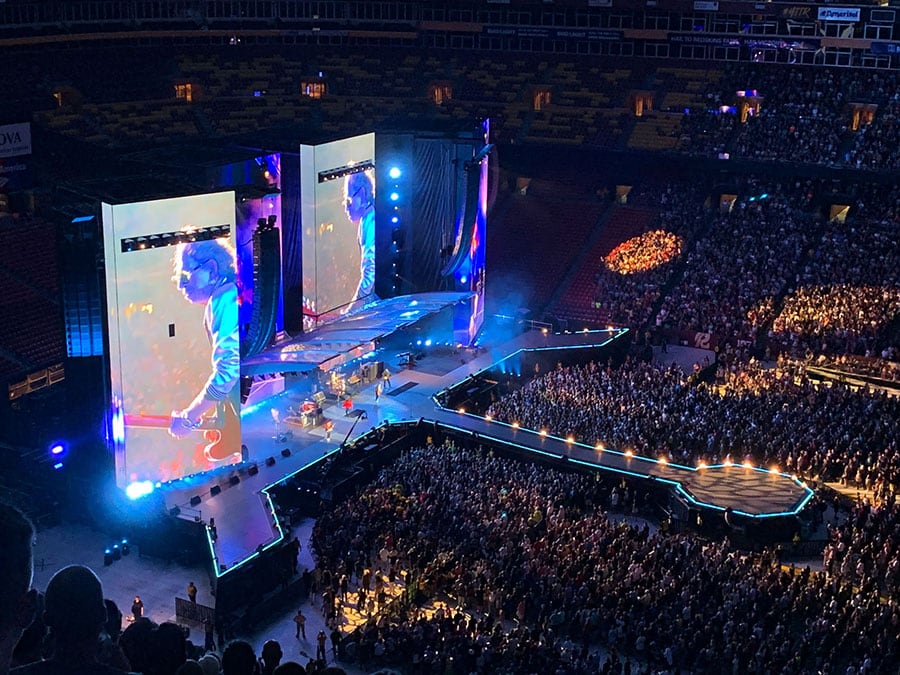 But no list of superlatives would ever be enough to bring on Richards, not only Jagger’s co-writer through a half-century of music authorship, but his mate as far back as their schoolboy days in post-war London. Jagger still tried to heap as much praise on his lead guitarist as possible before the crowd drowned out his thesaurus-reckoning.

“It’s good to be here. It’s good to be anywhere,” Richards then said at center stage. Even though I first heard him utter that same bromide onstage in 2002—believing it then to be an extemporaneous musing—the fact that Richards can still say the same 17 years later is a testament to the fortitude of his constitution and incredibly unlikely strength in the face of both entropy and the prodigiousness of his infamous appetites.

Richards then sang two songs—a staple of Stones shows, during which far too many head out to refresh their beers. In the past he has done more, but perhaps time was not on his side this night. Nonetheless, he performed admirably on “Slipping Away” and “Before They Make Me Run,” two safe bets from Richards’ lead-vocal entries from the Stones’ oeuvre. It might have shaken things up a bit had he chosen a cut from his bluesy 2015 solo disc, “Crosseyed Heart,” but for a victory-lap tour like “No Filter,” it’s perhaps a tough ask for less-popular items.

Richards thanked the thousands for indulging his turn at the mic, and from there it was all crowd-pleasers, with the World’s Greatest Rock ‘n’ Roll Band proving why they are so called as they gave the gathered precisely what they wanted with spirited runs on “Miss You,” “Paint It Black,” “Midnight Rambler,” “Start Me Up” and “Brown Sugar” before saying goodnight. 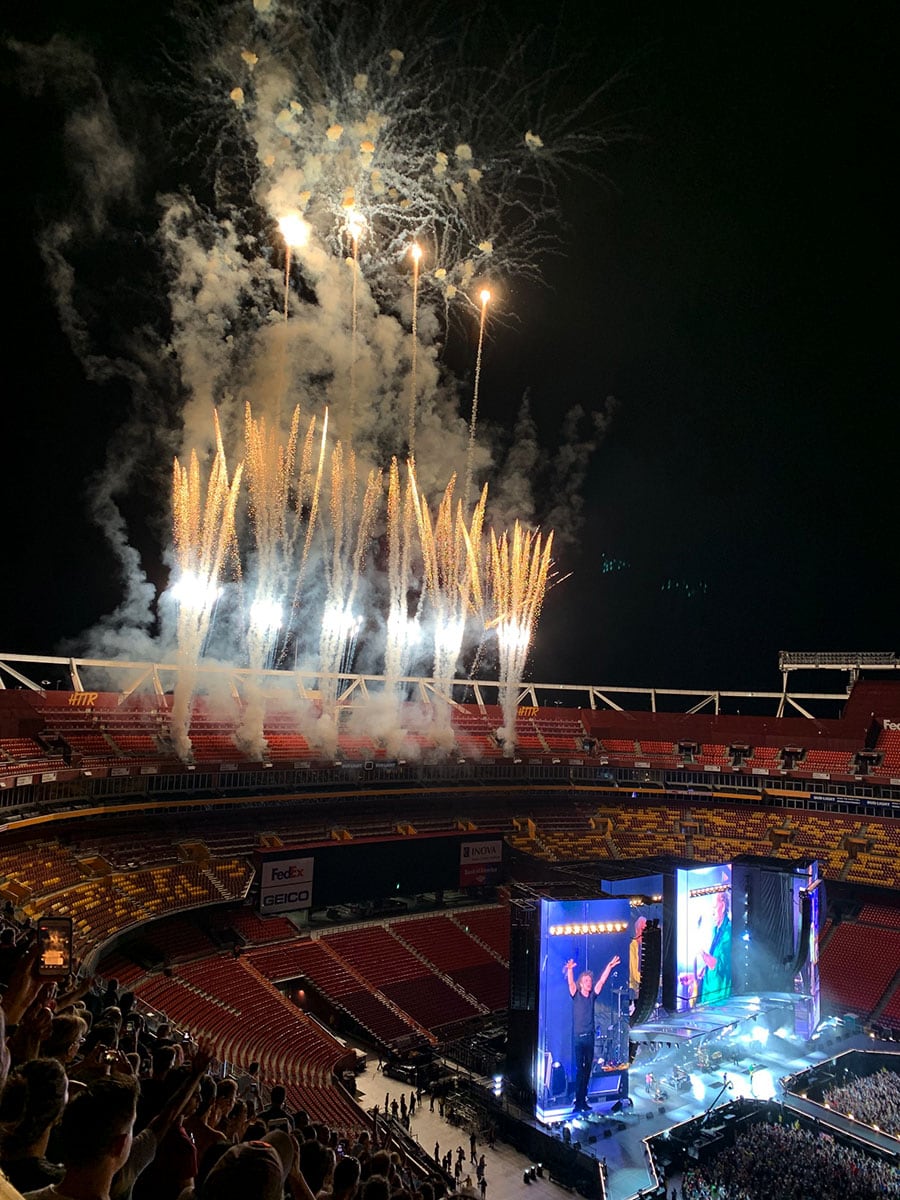 Goodnight but not yet good luck, as the fans screamed for more. The musicians returned for an encore that kicked off with “Gimme Shelter,” with Jagger joined at the smaller mini-stage by backup vocalist Sasha Sierra Allen, who filled the stadium to the rafters with controlled vibrato and poise on the “rape, murder, it’s just a shot away” refrain made famous by Merry Clayton on the original recording. Allen was duly applauded for her powerful solo, and she held her own on the remainder of the slinky duet with Jagger, somehow making a musical courtship with a man three generations’ her senior still unquestionably sexy.

There was no other way to close out the evening than “(I Can’t Get No) Satisfaction” from 1965, which was the first song Jagger and Richards ever wrote together. (In his book, Richards described the two being locked in a room by their manager at the time to write something…anything.) Fireworks capped the show, no less in celebration of the band than of rock ‘n’ roll—and, perhaps, the birthday of America, home of the English band’s longtime muse: the blues.

In front of a stadium filled with cheers, the band and their backup formed a chorus line to take a collective bow, after which Jagger, Richards, Watts and Wood stayed behind for their traditional quartet forward-dip of appreciation.

For decades the overriding question has been “How long can they keep this going? Could this be the last time?” The Stones have been rocking the planet for over a half-century, and have faced that (arguably ageist) inquiry for at least half as long. It is true: It cannot go on forever. But what’s more important is that their show will roll on for as long as it can.

And why should it be otherwise?