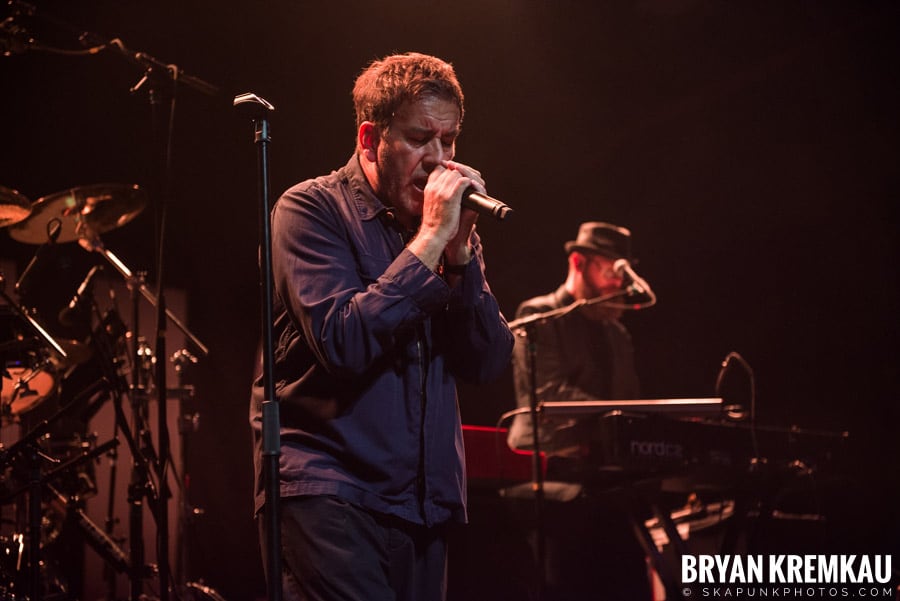 Many American ska fans have been waiting for this day for a long time, including myself. Sure, Jerry Dammers isn’t in the band anymore but that doesn’t change the fact that most of the original members of the Specials were playing New York and I wasn’t going to miss out on this one!

The first night that the Specials played at the always shitty Terminal 5 on the West Side of Manhattan, I heard it was just jammed packed with people. I was starting to dread the show yesterday because I didn’t know if the experience was going to be enjoyable. Perhaps T5 oversold the show like they have in the past? The Wednesday night show was sold out but it didn’t look like people were THAT packed in like I heard about the previous night. My brother, my girlfriend and I managed to get a balcony spot, which is about the best place to see a show at Terminal 5. But even there it can be a big pain in the ass. Whoever designed the club is mentally retarded I think. Why have tables on the balcony for drinks when you can just have them on the ledge like the other spots do? You have to end up leaning over the table to see the stage. The sightlines are some of the worst in the city and if I can, I always try to avoid seeing shows here. But I wasn’t going to miss the Specials!

Going into the show, I knew there wasn’t going to be an opening band. So that meant standing around for a good two and half hours. It actually went by quick enough for me, I don’t know why that was. Maybe I just had a lot to talk about with my group. DJ Trevor Evans and Terry Hall’s son Felix were entertaining the crowd with classic reggae and ska songs, which was nice to hear. But I still would have preferred to see an opening band instead and have the DJing played in between sets.

I went downstairs around 9:15pm because that’s when the band was suppose to come on. They didn’t come on until around 9:30pm. Thankfully, I asked a nice Irish guy to hold my spot by the balcony. I was worried I was going to lose the spot when I left so figured that would be the best approach and it was! I mean, you won’t meet nice people everytime but it’s worth a shot asking and being polite about it.

The Specials finally took to the stage after Toots and the Maytals’ “54-46 Was My Number” was done playing. They started things off with “Do The Dog” and the crowd quickly forgot they waited over 2 hours for the band to come on. Neville was bopping and running around on stage, Terry was singing towards the back by the drums, and Roddy & Lynval were rocking out with the guitars. Horace made an appearance up front once or twice but sat in a chair for the most part because I believe he had knee surgery?

“Dawning of a New Era” was played second, and then “Monkey Man.” During one of these songs, Terry Hall had enough with the awful sound system at Terminal 5, that he chucked his mic stand across the stage towards the horn section area. Good thing the horn section wasn’t standing there, but he threw that close to Horace though. Have a feeling they won’t play Terminal 5 again, and I’m all for that! Surprisingly, the bouncers let us stay in the pit for another song or just didn’t keep count. The next song after “Monkey Man” was “Gangsters.” I thought the band was really on tonight and did a superb job. Granted, I knew exactly what songs I was going to get that night, it was still fantastic to finally hear them live.

While I ventured back up to my spot in the balcony, The Specials played “Its Up To You.” Never really cared for that one as much as others so it was a good song to walk back to. I hate when that happens and it’s a song I actually like. At my spot, it was ten times more crowded, but squeezed back in only to see about 2 or 3 members of the band on stage. Gotta love Terminal 5’s awesome sightlines! NOT! The next few songs ended up being “Rat Race,” “Hey Little Rich Girl” and “Blank Expression.” I just danced in my spot, while trying to see the stage. Seeing the stage or not, I just loved listening to the music and the crowd loved every minute of it too. From my perspective, most people were dancing and having a good time. It was cool to see the band members shaking hands with the crowd so much, handing out autographs and setlists and even throwing out lots of water. Or in Terry’s case, bags of tea. That was strange to see but stranger things were to come…

“Stupid Marriage” and “Concrete Jungle” were soon after those tracks. “Stupid Marriage” was more upbeat than on their albums and I dug it a lot. Terry exited the stage (I think – I couldn’t see shit) for “Concrete Jungle.” Rockabilly Roddy Byers sang the song awesomely and was definitely a stand-out song that night. Towards the end of the set, The band played a lot of my favorites like “A Message To You, Rudy,” “Little Bitch” “Do Nothing” and “Nite Klub.” “Little Bitch” has always been a favorite of mine and I absolutely loved hearing it last night. At some point at the end of the set, Terry decided to take his socks and shoes off. He was walking around barefoot. He didn’t really seem to appreciate Neville throwing his socks out in the crowd. He stopped the song to tell everyone those were his last socks and could he get them back? It was actually quite amusing. It was even more amusing when Terry gave out Lynval’s hotel and room number!

The band played “Too Much Too Young” and then on a slower note with “You’re Wondering Now.” They came back for an encore with the song of the night, “Ghost Town.” I didn’t think “Ghost Town” would be the highlight but it certainly was! Excellent beats, and arranged differently than on their albums. The final song of the evening was “Enjoy Yourself.” Honestly, never been a fan of that song either so I decided to take off and get a jump on the crowd leaving. Besides, I had to be up in a few hours for work. Fun Times!

Overall, it was absolutely fantastic to see The Specials after all these years. I’ve been waiting for this show to happen since the Specials reunion was announced. It was fun seeing them back in the late 90s as another form of the band, but it was something else entirely to see the original band (or at least 95 percent of them). I highly recommend you check out the band when they hit your town this summer, which I’d imagine they will be doing. They will be back in New York City on August 22nd at the Central Park Summerstage for a free show! So see ya then rudies!