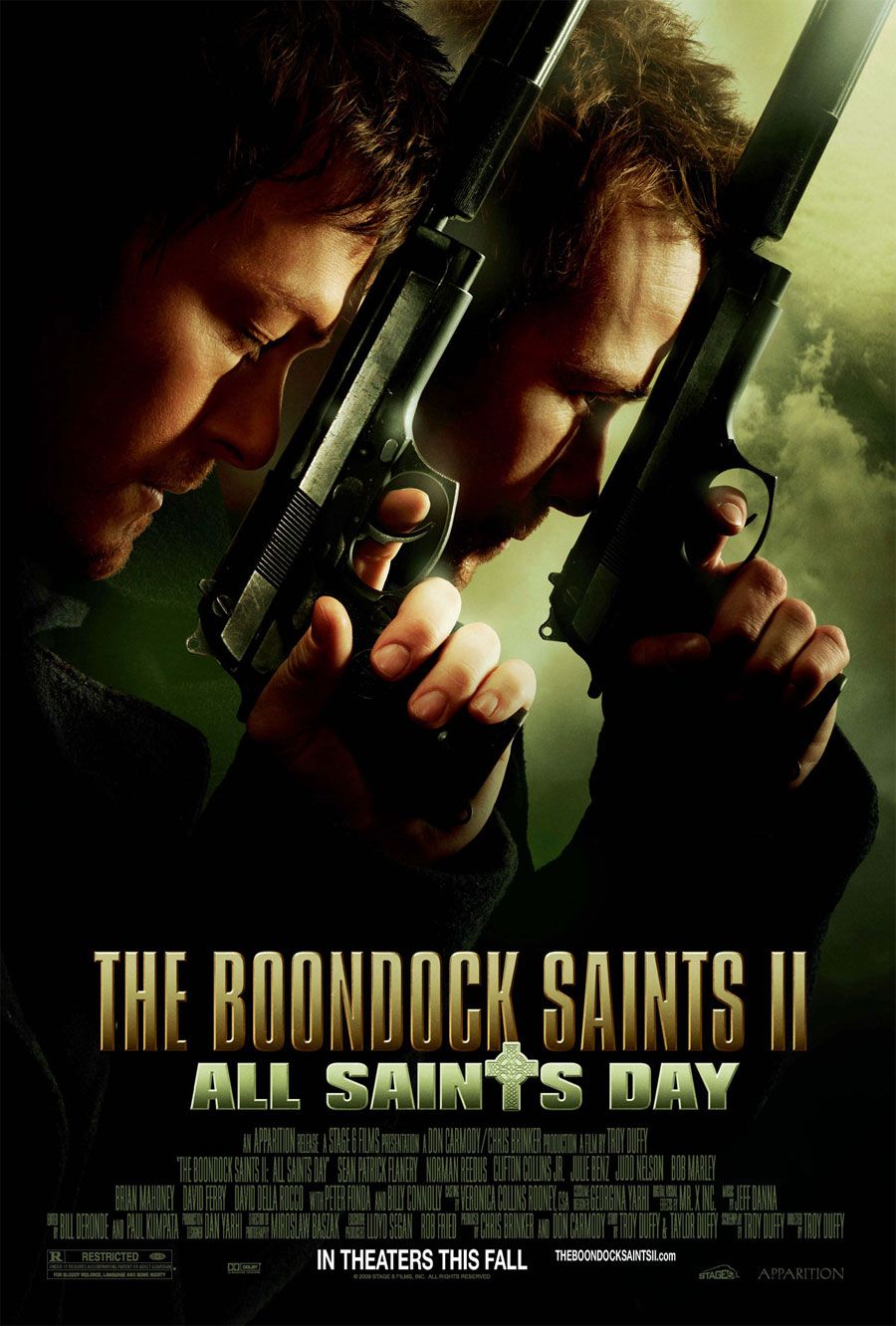 The weekend that all the Boondock Saints fans have been waiting for has arrived. Only thing is, unless you live in MA, NY, NJ, CA and few other States you’ll be shit out of luck trying to see the movie. If you have the chance to see the movie in theaters, be sure to do so! DEMAND IT here. Boondock Saints II: All Saints Day is just as good as the first film! And whatever you do, don’t go on Wikipedia or try to read up things because you’ll spoil a twist!

The cult classic movie’s sequel starts off with a brutal murder of a priest that takes place in Boston. It’s meant to look like the Saints did it and to draw them back to Boston. The boys and their Father have been living the quiet life in Ireland. The original policemen (Dolly, Greenly, Duffy) of the first movie are back, and getting nervous that the FBI is investigating the priest murder. Smecker’s protégé Special Agent Eunice Bloom (Julie Benz) is the head investigator on the case, the cops are nervous she might know they were aiding the Saints in the past. Meanwhile, Connor and Murphy find out what has happen and decide to head back to Boston. They dig up their old gear and head for Boston via freight boat while their Father stays behind. On the boat, they meet up with a Mexican fighter named Romeo (Clifton Collins, Jr.) and he wants to join up with them, and they agree. The police and Agent Bloom think Concezio Yakavetta (Judd Nelson) is upset over his Father’s death and signs point to him that he’s the one behind everything. The brothers think the same thing so they go after Yakavetta’s crew again; only that’s not the case. Someone else is involved and wants the Saints killed along with their Father as well.

From being a fan of the first movie, I definitely wanted to see the movie in theaters. I was skeptical that the movie wasn’t going to live up to the first one but I think it’s on par with it. I was concerned that Willem Dafoe wasn’t going to be in it, since he was best thing about the first movie. But I’m really happy with the final product. Is the movie flawed? Yeah, you bet…but that doesn’t mean I wasn’t entertained and loved it. The film definitely feels like the first one in style, dialogue, action, etc. Most of the original actors are all back and that’s fantastic. Troy Duffy certainly wrote some funny lines for the characters. The guys that are the detectives: Dolly (David Ferry), Duffy (Brian Mahoney), and Greenly (Bob Marley) shine in this movie. They are given a lot of the comedic moments in the film, especially Bob Marley. At times they reminded me like the 3 Stooges of the police force.

Now as far as the Saints are concerned, they have aged over the last 10 years. Sean Patrick Flannery looks to have some face work done (either plastic surgery or Botox…something). It’s a bit distracting, and ever since I saw the trailer for the movie, I was wondering why he would have done that. He’s a good looking guy, why make yourself look like you had an allergic reaction to a bee sting. Maybe he just had it done and the swelling didn’t go down yet because his face doesn’t look as bad now. Just like the first movie, their accents are spotty. I’m sure every real Irishmen out there are rolling their eyes seeing these movies. Otherwise, they do a good job with their roles, and have numerous funny lines. I wish Billy Connolly was featured more in the movie since he was so bad ass in the last film. You get to see a lot of the back story on how he became Ill Duce. But you don’t see him in the movie as much as I would have liked. The scenes he appears in, he definitely steals those scenes. Clifton Collins, Jr. was hilarious as Romeo, and a welcomed addition to the franchise. Rocco makes a return in some voice-overs and flashbacks/dream sequences. His presence is sadly missing from the movie but glad he made some cameos. I liked Julie Benz’ character too, but I wish she didn’t use the twangy southern accent. Then you got Peter Fonda speaking in an Italian accent. This movie could be known as the movie with the bad accents.

Negatives aside, this movie is very entertaining and glad I got to see it in my area. Even though I had problems with the movie, I still felt this movie improved on the first movie. The writing is a little bit better, and the story is fleshed out a little bit. The plot definitely has some holes, like what happened to the cops towards the end of the film? I guess they needed to move the story along so some things were left unanswered. Perhaps there will be a director’s cut of this movie as well? I hope Troy Duffy stays the course and continues to make these movies. I think there’s an audience for these movies, especially on home video. If they were to make a new one, it would probably be straight-to-video and I’m fine with that. If you loved the first movie, you’ll love this one as well!
Bottom Line: Just as good as the first movie!