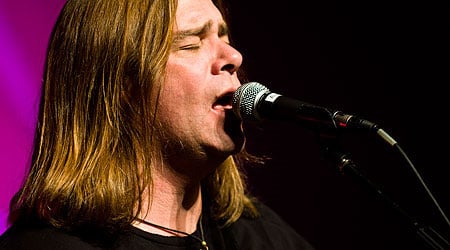 What a surprise to see that Alan Doyle of Great Big Sea has been added to the cast of the untitled Robin Hood movie that Ridley Scott is directing. He will be playing one of the Merry Men, Allan A’Dayle. Russell Crowe is starring in the movie so I guess it shouldn’t be such a shock since the two are friends and both have worked on each others albums. Cate Blanchett is also set to star and the movie is projected to come out in 2010.


Alan broke the news to everyone on their official website:

Now to get some news off my chest. I’m terrible at keeping secrets, so this announcement comes with great relief. Yours truly has been cast as the Troubadour, Allan A’Dayle in the new Universal Pictures Untitled Robin Hood Film. The film is to star Russell Crowe and Cate Blanchett, and to be directed by Ridley Scott. If you recall, I had to scoot to LA after the big fundraising gig in Toronto last December. I went, Lute in hand, to read and sing for the part and must have done all right, as I’ve been offered and accepted the gig.

For a number of days prior to and following the BNL Cruise, I was in Australia with Russell, and some of the other Merry Men, training in Horse Riding, Archery, Weapons Training and a few other skills required for the role. It was great fun, I must say, to look at your schedule for the day and have it read like a 12 year old boy’s fantasy; bows and arrows at 10am, sword fighting at 11am etc.
[Great Big Sea]

Read the rest of the Alan’s blog posting at the link above. He talks more about the project and the hiatus of Great Big Sea. One thing is for certain, this project has gotten a lot more interesting now! Alan is such a charismatic and funny person and I’m surprised he hasn’t been in any other movies before. I’m sure he will be in more movies after this one! I can’t wait to see it since I love anything Robin Hood.