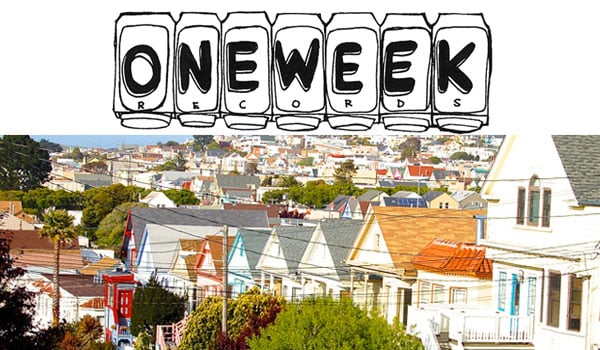 Joey Cape always seems constantly busy and now he’s launching a new record label called One Week Records. The idea behind the label is have an artist come spend a week at Joey’s house & studio and record songs within the week. Sounds like a great idea and the albums are cheap too! The label is already releasing albums from the Flatliner’s Chris Cresswell and Scorpios’ Brian Wahlstrom.

Joey Cape has long been known as the frontman of Fat Wreck legends Lagwagon, and recently popping up more and more as an acoustic singer/songwriter. Now Joey’s breaking new ground with One Week Records, an unprecedented endeavor that’s part record label, part studio project, part Warholian art factory and part bed and breakfast. It’s as cool as it sounds, and it’s launching on May 16th at www.oneweekrecords.com with two inaugural releases, one by the Flatliner’s Chris Cresswell, and another by Brian Wahlstrom of Scorpios.

Here’s how it works: Joey calls up a buddy and convinces them to come live at his house for a week. In those seven days, the two of them will crank out a ten-song album. Participants in the One Week experience sleep, eat, shower, collaborate and generally live with Joey, as together they capture ten visceral, honest, no-frills recordings on Joey’s home studio. At the end of the week, the guest is given a sharpie and told to draw an album cover. The digital files then become available on the One Week site for five measly bucks. Boom. It’s quick, it’s fun, it’s cheap and it’s all done in house by the Caper.

Inspired by the notion that studio recordings can easily become overthought and sterile, Joey decided that a ten song record made in seven days of deep focus could be the best way to capture that “really honest representation of the creativity, artist and song” that is often found on demos, but lost once studio perfectionism kicks in. “A One Week record is done in a week,” says Joey. “We don’t have time to wreck it by second guessing things.”

Think of it as studio immersion therapy, troubadour fantasy camp or as a really elaborate excuse to hang out with Joey for a few days. Regardless, One Week is a chance for artists to experiment with acoustic instrumentation versions of their hits, to flesh out some new ideas or to just share their song sketches with their fans via the One Week website, all while drinking coffee and/or whiskey for seven straight days with one of the nicest dudes in rock and roll. The Chris Cresswell and Brian Wahlstrom sessions will be available at www.oneweekrecords.com on May 16th.