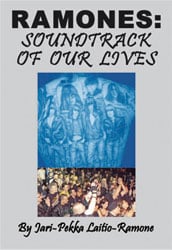 Finnish journalist & Ramones webmaster Jari-Pekka Laitio-Ramone spent over 5 years compiling stories, photos and other material for his Ramones book, “Ramones: Soundtrack Of Our Lives.” The book honors the Ramones legacy, and features many unreleased stories and photos. If you’re a fan of the Ramones, this looks like something you’d want!

Ramones book entitled Ramones: Soundtrack Of Our Lives is the result of nearly 5 years worth of work. It is full of poignant stories that reflect what Joey Ramone (RIP 2001), Dee Dee Ramone (RIP 2002), Johnny Ramone (RIP 2004), as well as the rest of the Ramones family have impacted their fans worldwide.

Ramones: Soundtrack Of Our Lives has interviews and text written by 90 contributors and has 224 pages, and 295 photos/drawings. This book brings together the Ramones family as never before, there are
interviews by every surviving Ramones member: Ramones drummers (Tommy Ramone, Marky Ramone, and Richie Ramone), bassist CJ Ramone, and Johnny Ramone’s wife Linda Cummings. The introduction is written by Tommy Ramone.

Reluctant to offer fans stories which have been relayed thousands of times before, author and Ramones webmaster Jari-Pekka Laitio-Ramone provides new information about the band. His focus is on the Ramones
impact on the history of Rock N’Roll. This work is best described as a tribute book. Other Ramones
publications have dwelt too much on the fights, problems and other negative aspects of the Ramones musical legacy. Lacking are the positive stories that are integral to the Ramones history. Jari-Pekka
offers candid and positive opinions and stories from people who were influenced musically and inspired by the Ramones.

Jari-Pekka has been dedicated to running the biggest and most updated Ramones homepage since 1995 (http://ramones.kauhajoki.fi), and has authored the books, Heaven Needed A Lead Singer: Fans Remember Joey Ramone (2002), and Rock In Peace: Dee Dee And Joey Ramone (2004). “I am happy to get the chance to show Ramones fans lots of unreleased photos and drawings prepared exclusively for this book?” Jari-Pekka Laitio Ramone states. This book has never-before-released photos and drawings by people like Jenny Lens, George DuBose, and Bobby London.

You can order the book here.