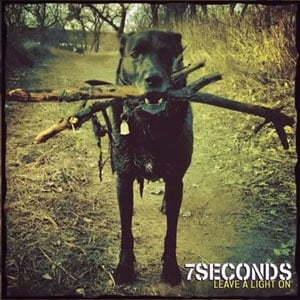 The seminal hardcore band is back with their first release in almost a decade with “Leave A Light On”. Where have they been? What have they been up to? Have they lost their edge? Have they slowed down in their old age?

I don’t have the answers to most of those questions nor do I really care. What I do care about is some new 7 Seconds material…finally! “Leave A Light On” is the bands’ first release on Rise Records and it is a good one.

All of the things that you can love about 7 Seconds are prevalent on this album. There are classic hardcore punk songs, melodic sing-a-longs, social awareness, anti-racism/anti-hate messages…you know, the basic core and backbone of the band for the past thirty plus years. And with 7 Seconds, those messages are still poignant and as meaningful as they were decades ago. Songs like “Slogan on a Shirt”, “Your Hate Mentality” and “Exceptional” are instant classics. Those songs are fast, angry and have a strong message. Those are some of the standout tracks on an album full of standout songs. But there’s more to this release than just fast songs strewn about.

“Leave A Light On” follows what you could consider the prototypical 7 Seconds formula of smart intelligent, fast-paced high energy songs and that would be true for the most part but, as usual the band strays from that formula with some slower gems hidden throughout. Songs like the title track and “Standing By Yourself” have a hard rock/punk sound but are still 7 Seconds to the core. As I mentioned before though, the band would throw songs like this in places that you wouldn’t expect on albums. When you strip away the hard edge on quite a few 7 Seconds songs you’ll realize that the band can write some captivating pop songs.

With this release 7 Seconds adds another chapter to a storied career that spans four decades. Nothing about “Leave A Light On” says to me that the band has any indication of slowing down anytime soon. Personally, it’s one of the best 7 Seconds albums of a half dozen releases. It just has everything that you could want in a 7 Seconds album, period. I tried to be critical of this release, but damn it…it just wasn’t happening. For punk fans new and old alike…make this album a priority listen.

Bottom Line: There really is no stopping this band. They continue to put out important music. This is one of their best releases in years.
Notable Tracks: Slogan on a Shirt, Upgrade Everything, Hate Mentality, Leave A Light On, Heads Are Bound To Roll
Overall Rating

7 Seconds Are No More