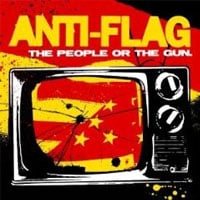 Anti-Flag are back with another politically charged album, but this time it’s on Side One Dummy. Their last two albums were on RCA but the band is back on an independent label now. Their previous album “The Bright Lights of America” was a big disappointment for me. The songs weren’t that great, and seemed like something was lacking in their songs. It just wasn’t good. Their other RCA album “For Blood and Empire” was their best album in my opinion so when I put on this album, I was hoping “The People or the Gun” would be more in line with that one. I think Anti-Flag have rebounded from their last dud of a record!

The 7th Anti-Flag album is on line with “For Blood and Empire” and “The Terror State”…Thankfully. This time around, I prefer Justin Sane’s vocals over Chris #2’s vocals. The songs just seem more melodic and catchier. I usually liked Chris #2’s vocals, but this time I think he’s shouting too much. Honestly, it sounds like his vocal chords are going when he screams, or maybe he was sick or something? Topics that they cover range from the on-going war in Iraq to the Economy. Most of the tracks are straight up punk rock, and aren’t some rock anthems like they tried on their last album. My favorite song on the entire album is “We Are The One.” The song contains everything I like about Anti-Flag’s music (The woahs, the thrashing guitars, and a catchy beat). If their last album turned you off to AF, give them another shot with “The People or the Gun.”

Bottom Line: Ten times better than “Bright Lights of America”
Notable Tracks: The Economy Is Suffering…Let It Die, We Are The One, This Is The First Night, When All The Lights Go Out
Overall Rating: