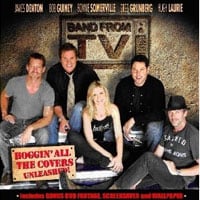 Band From TV is a bunch of celebrities coming together for charity, and having a great time at the same time. Band From TV consist of House M.D’s Hugh Laurie on keys, Heroes’ Greg Grunberg on drums, Desperate Housewives’ James Denton on guitar, The Bachelor & GSN Live’s Bob Guiney on vocals, and The Ugly Truth/Cashmere Mafia’s Bonnie Somerville on vocals as well. Other celebrities partake in the band from time to time like Scott Grimes, Jesse Spencer and Adrian Pasdar. The band has a huge following and they finally released a live album with bonus DVD, which this release is.

The CD contains 13 tracks and the DVD includes bonus content like concert footage, band interview, music video and other goodies. Some of the songs they play include “Piece of My Heart,” “You Really Got Me,” “Pink Cadillac,” “Mustang Sally,” “Viva Las Vegas” and “Feelin’ Alright.” I think the reason why this band is so popular is because people find it interesting to see celebrities playing music besides acting or doing what they normally do. Plus, people might just want to see the celebs in the band and support their causes. I’d go to one of their concerts just to see Hugh Laurie rocking out on the keyboards. This project started out as a one-off thing but quickly spun into something else and I think it’s a cool thing. Why not have a good time playing music and entertaining people instead of just writing a check to their favorite charity.

While this isn’t something I would listen to on a normal basis, I still found this album cool and interesting just for the fact that celebs are musicians too. In all honestly, they aren’t bad and in fact the opposite of that. Even though this is a covers album, I’d like to see the band branch out from that instead of just sounding like a bar band that just does covers. Maybe they’ll do original cuts live, I don’t know. If you want to support the band and their music, be sure to buy the album since all the proceeds go to various charities.