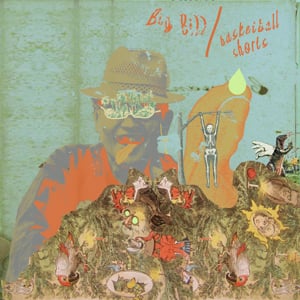 There are a lot of firsts in regards to this split EP. This is the first official release from Austin, TX based Fleeting Youth Records and both of the EPs on the split are the debut EPs for each band. I feel like I’m at the start of what could be something cool. Speaking of cool, this split EP is available on a lime green cassette tape. Seriously!

First up on the playlist is obviously, an Austin band that goes by the name of Big Bill. Immediately I am tricked into thinking that this band is somehow a bastard lovechild of the Dead Kennedys and the Violent Femmes. The lead singer, whose name happens to be Hot Salad (is it his birth name?) sounds very much like a mixture of Jello Biafra and Gordon Gano. Big Bill mixes the sounds of those two bands with a surf rock garage-y punk sound that sounds almost as if it came straight from early 80’s LA. There was still a unique touch to Big Bill’s sound and when you mix that in with the strange and odd lyrics you get something that is not for the faint of heart but something that is daring and different.

Basketball Shorts are next to the table with their “Total BS” EP. Hailing from Austin, TX as well, they may not be as totally off the wall as Big Bill but they also have a strange and eerie sound to their material. Whether it’s singing songs about Peter Venkman or about yuppie girls that are uptight about their names, the songs are upbeat and catchy as hell. Basketball Shorts sound is a mix of garage rock, punk and surf rock…it’s a simple sound that is raw and full of energy. I enjoyed the guitar noodling as much as I did laughing along to the lyrics.

I am very impressed with the first outing from Big Bill and Basketball Shorts. I also want to give some rep to Fleeting Youth Records for doing something out of the ordinary and taking a chance with it. While there are digital releases and vinyl available for their first couple of releases, they are both also available in cassette tape form. They also have cassette players for sale on their webstore. While cassettes may seem like dinosaur tech from another era, and they pretty much are, it’s good to see someone standing up for something that was popular in my heyday. If there are vinyl enthusiasts out there, why can’t there be cassette tape enthusiasts as well. Bring back the ghetto blaster!

Bottom Line: : If you like underground alternative punk rock then look no further. Both bands on this split have a unique sound and plenty of personality to go along with it.
Notable Tracks: Get With The Goblins, Juice U, Peter Venkman, Genevieve
Overall Rating: