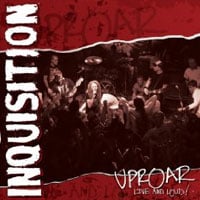 Inquisition recorded a live album in Richmond, Virginia on May 18th & 19th 2007. The band felt the only way to say goodbye to their fans & friends was to put on shows, and this is the result. Included with this CD is a 3-hour DVD which is pretty awesome if you’re a fan. The DVD contains 2 sold-out reunion shows as well as behind the scenes footage. I wish more bands that were calling it the quits did something like this.


For some reason, I don’t know much about Inquisition, yet they have influenced many bands over the years. I do know that members have gone on to form bands like Strike Anywhere, River City High and Ann Beretta. The production quality could have been better because it sounds like this was recorded in the 80s. I think if these guys weren’t a punk rock band, I would care more about the audio but since they are it makes me nostalgic of when I heard live albums. During each song, you can hear the crowd cheering & singing along, and you get the sense how crazy the shows were. Inquisition isn’t a band anymore, but at least you can listen to their final show and watch them on DVD too!

Bottom Line: Worth getting if you’re a fan of the band.
Notable Tracks: Life is Precious, Mayday, Ideas Are Bulletproof
Overall Rating: