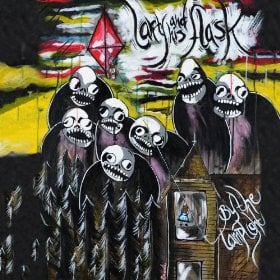 Larry and His Flask are by far, one of the best live bands I’ve ever seen! Their latest album demonstrates their eclectic taste of bluegrass, punk rock, and New Orleans jazz.

By The Lamp Lights was funded by the fans (similar to Kickstarter) but the band called it “Filled The Flask.” Obviously the band reached their goal and enough people wanted to hear new music from LATF. After hearing Hobo’s Lament, I was hoping the band continued that high onto the next album. For the most part, I think they do.

“Pandemonium” starts off with some harmonized singing and then goes into hectic Flask mode that sounds like they a New Orleans street band on speed. I just love it when the band has these high octane Dixieland style songs and kind of wished they would have horns on every track. Maybe it’s just the ska fan in me saying that though. That track is a favorite of mine now. Another highlight is track 2 “Out Of Print” and this will definitely be a fan favorite for their live shows I think. The guitar work sounds really cool too!

“Barleywine Bump” has those megaphone style/old-time mic vocals in the beginning of the song, and I’m not a fan of that. Half-way through the song it gets a little bit better. I have a feeling this one would sound better live. “Battle For Clear Sight” has Jenny Owens Young making a guest appearance, which I could tell it was her without even looking anything up. She has that distinct voice. I would say after that point, the album begins to be hit or miss with me. This happened with Frank Turner’s latest album too and there ended up being way too many slow songs for liking. I don’t mind 2 slow songs on an album but if a band is known for speedy bluegrass jazz, that’s what I want to hear. I have to be in the right frame of mind to listen to slow songs. By themselves, the songs are decent though. In the end, I wish more songs sounded like “Pandemonium” and “Out Of Print.”

Bottom Line: Some great tunes on here but a few I could do without
Notable Tracks: Pandemonium, Out Of Print, Home of the Slave, Tides
Overall Rating: