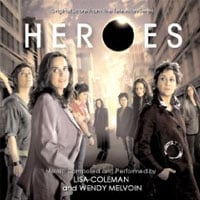 For those who don’t know, Heroes is the TV series that airs on NBC and is about the lives of ordinary people who find out that they have superpowers. It stars Hayden Panettierre, Milo Ventimiglia, Masi Oka, Adrian Pasdar, Zachary Quinto and many others. The first season was excellent and the rest of the seasons has been a hit or miss with me. Regardless of suckiness or not, one thing that stands out is the music from the show.

Lisa Coleman and Wendy Melvoin (from Prince’s The Revolution) handle the scoring on the show, and they do a great job with that. If I can notice the music from a TV show, than they are doing their job. The score has a mixture of motifs and themes, and uses traditional orchestra sounds with computerized beats. Each character gets their own track on the CD since each one has their own theme. The most recognizable theme for me is Mohinder’s, even though his character sucks and gets dumber with each season. Sylar’s theme is recognizable in the fact that there are clocks always playing, but the music itself isn’t that interesting. The clock sound effects are in a way, similar to John Williams’ Jaws theme. Every time you hear it, you know something bad is about to happen. There are 10 tracks in all, and are from the first season of the series. Not every track is that interesting, but there’s a few good tracks in here.

Bottom Line: If you like the music from the show, you’ll want to hear this soundtrack!
Notable Tracks: Peter, Hiro, Mohinder, Kirby Plaza
Overall Rating: