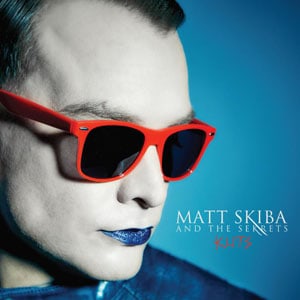 Obviously, this is the same Matt Skiba from Alkaline Trio fame and obviously this looks like a side project of his! Good times!

With Alkaline Trio taking a short break, it seems that both Matt Skiba and Dan Andriano take time off from music to make more music. “Kuts” is actually the second full length release from Matt Skiba and the Sekrets.

Much like with Dan Andriano’s recent solo release, I’ve never listened to any side project stuff from Skiba. And, while both members of Alkaline Trio take some cues from their meat and potatoes band, they both have very different influences with their solo material. Dan’s influences seem to stem from hard rock and early punk and Matt’s seem to be steeped in goth rock, new wave and post-punk. You can definitely get a feeling of the Cure’s influence on “Kuts” but also that of 80’s new wave/synth rock.

I’m not much of a goth rock or new wave fan so I found a good portion of songs on “Kuts” to just blend into one another. That’s not to say that there weren’t any good songs to be found. “She-Wolf” and “She Said” sound like they come straight from an Alkaline Trio release while the haunting sounds of the acoustic rock number “Vienna”, which closes out the album, will stick with you after the final notes are strummed.

“Kuts” will be something that longtime fans of Matt Skiba will need to add to their collections. I was turned off by the heavy goth rock/new wave influence throughout the album, but there were still a handful of good rock songs. As usual, Matt Skiba’s songwriting and vocal drawl steal the show throughout. I suppose that I just prefer other music backing Mr. Skiba.

Bottom Line: Pulling from his heavy 80’s goth rock/new wave influences, “Kuts” pulls together those career-spanning influences for an album that shows his softer Robert Smith side but doesn’t ignore his edgier side altogether. And also, all C’s have been replaced with K’s for this release.
Notable Tracks: She Wolf, She Said, Vienna, Lonely and Kold
Overall Rating: