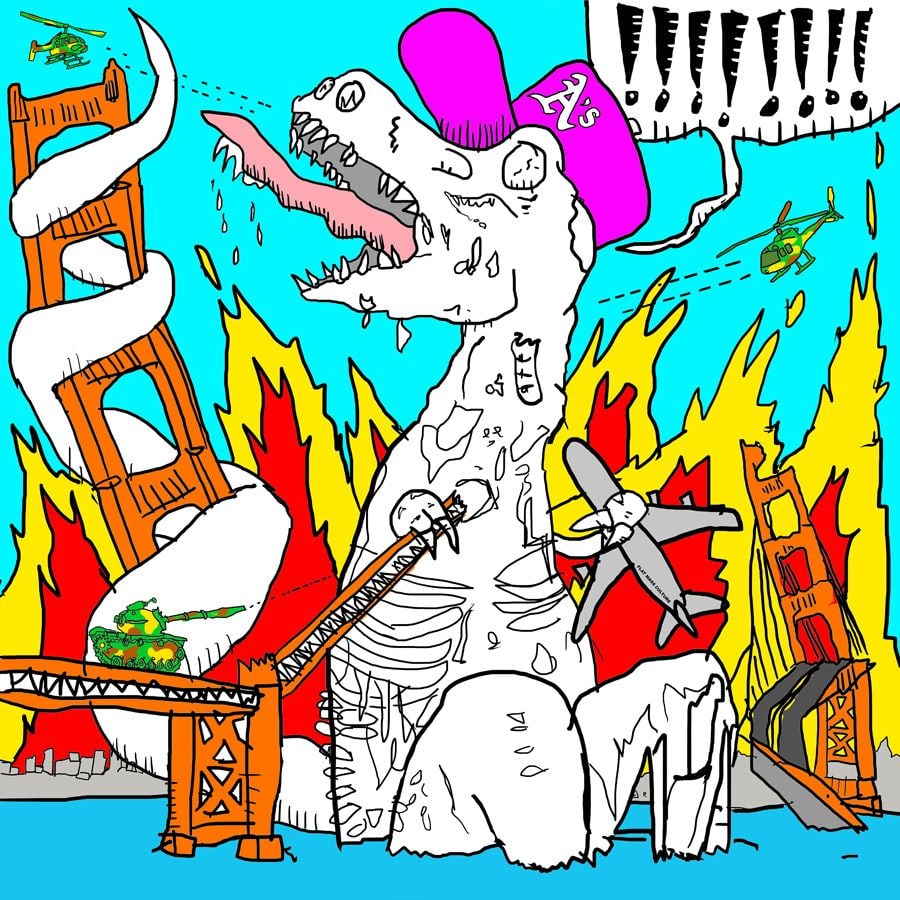 “The Zombie Dinosaur LP”…which has one of the greatest album names of all time…represents the fourth full length album from the Bay area MC. With nerd culture references abound, will this album crash-land on Zebes or will it bring joy to the world like a jelly bean eating blob?

Nerdcore music has been a thing for quite some time. What exactly is nerdcore? To sum it up in the simplest of terms, it’s a genre of hip-hop that makes references to “nerd” culture things like video games, comic books, movies, etc.

With thousands of other MC’s out there like MC Frontalot, MC Chris, MC Bat Commander and MC Hammer, where exactly does MC Lars fit into the mix? Personally, he’s one of my favorite nerdcore MC’s with Adam WarRock being a close second. Now I’m not a hardcore Nerdcore fan, but MC Lars is not only a bon-a-fide nerd, but he also has an infinity for punk and ska music which seems to be on par with every 90s nerd kid. He’s worked with members of dozens of ska and punk bands such as Bowling For Soup, Time Again, the Aquabats, Less Than Jake, Suburban Legends, Zebrahead, Simple Plan and has also toured with those bands and many more. Being a ska punk kid and also what you would consider a hardcore nerd, all of that adds up to plenty of love and respect towards MC Lars.

After the brief history lesson, that leaves us now with the review of “The Zombie Dinosaur LP”. First up are the guest appearances, you get Stza from Leftover Crack screaming like a zombie t-rex, Roger from Less Than Jake, Suburban Legends, Kool Keith and Watsky to name a few. You also get a guided tour of nerd culture with songs about “Who Framed Roger Rabbit?”, Star Wars, the Simpsons, the Legend of Zelda, Game of Thrones, the Walking Dead as well as dozens of other nerd culture name drops.

With all of the nerd culture references, there are still some songs that are more subtle with it or that are just satirical in nature. One of my favorite songs on the album is “Never Afraid”, a sweet introspective song about the variety of books that MC Lars’ mother read to him during his youth and how those books affected his life as he grew older.

What’s my favorite song on the album, you may or may not ask? It’s definitely “Sublime With Rome (Is Not The Same Thing As Sublime). Not only is it a straightforward third wave ska punk song (much like “This Giant Robot Kills”) but is also echoes my sentiments on money grabbing “reunion” bands such as Sublime With Rome, Black Flag, the Dead Kennedys and the Wu-Tang Clan.

Some of my other favorites on “The Zombie Dinosaur LP” are “Zombie T-Rex”…I love hearing Stza screaming as the zombie t-rex and I don’t think that will ever get old, “The Ballad of Hans Moleman” because he is by far one of the greatest Simpsons characters of all time and it’s great to see life through his Coke bottle glasses, “Dragon Blood” which is a hardcore nerdcore song about Daenerys Targaryen from “Game Of Thrones” and “The Dip” which tells the story of Judge Doom from “Who Framed Roger Rabbit?” and his quest to destroy every cartoon character by dipping them out of existence.

“The Zombie Dinosaur LP” has risen to the top of my MC Lars top four albums. Not only does it throw around nerd culture and literary references with a lot of love and respect, but it also has a great variety of styles and genres without sounding forced. Rap, hip hop, dance, nerdcore, punk, ska, rock, surf rock…Star Wars, Legend of Zelda, Stuart Little, Jack Kerouac, Beowulf, the Simpsons, zombies, Game of Thrones, Where The Red Fern Grows, the Grinch, Who Framed Roger Rabbit?, Sublime, the Misfits, the Dead Kennedys…it all manages to come together sonically to form one of the most unique and fun listens of the year. This will furthermore cement MC Lars as one of the most creative and likeable MCs in not only the nerdcore genre, but in the entirety of hip hop. Take a listen, open your ears and enjoy.

“The Zombie Dinosaur LP” is set to release on November 6th!

Bottom Line: Nerdcore at its finest. Whether you’re a nerd yourself or just a fan of good hip hop, this is definitely an album that you deserve to give a spin…or two…or twelve.
Notable Tracks: Never Afraid, Sublime With Rome (Is Not The Same Thing As Sublime), Zombie T-Rex, The Ballad Of Hans Moleman, The Dip, Triforce, Dragon Blood
Overall Rating: