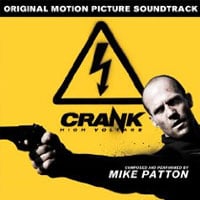 Crank High Voltage is the soundtrack to the Crank sequel starring action movie star Jason Statham. Crank was a hilarious, over the top action film that I enjoyed a lot but can’t for the life of me think of how they are going to explain how Chelios survived that fall. He did fall from the freakin’ sky after all! In any event, he does survive but this time he needs to survive by electricity. He needs to give himself jolts of energy in order to keep his fake heart from crapping out. He’s got to go after the people that stole his heart ya know. Yeah yeah, just go with it and enjoy the ride!


The score is composed by Faith No More’s Mike Patton. It’s weird that I haven’t seen him compose any other scores but then again, most contemporary composers were rock musicians. I believe he did one other score before this but I haven’t heard it. Patton’s score is what you’d expect it to be. Loud, noisy, fast paced and it makes you energized. I’m sure it fits with the movie well but by itself on a CD, it’s not that listenable. At least not to me anyway, someone else might like this score but I didn’t.