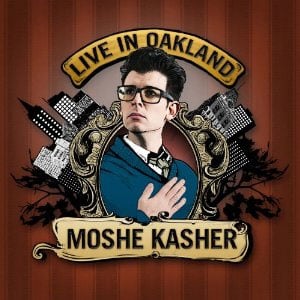 I haven’t really heard too much Moshe Kasher before. Then he started to pop up on Doug Benson’s podcast Doug Loves Movies, @midnight and Made Man’s Laugh Trek where him and Nick Thune do stand-up in random places. He was funny on those things so I decided to give his stand-up a look and ended up laughing my ass off.

Moshe states early on that he’s a heterosexual, despite everyone thinking he’s gay. He’s very flamboyant and it’s probably one of his ploys to get women into bed with him. I think one of the reasons why I enjoyed his act so much because he is so animated and lively on stage. You can’t really tell when you just listen to the album though. Thankfully this is a CD/DVD and you can have that option. I found the bit where he was talking about fighting with a heckler really funny, which all started when he threw a dreidel at the guy. Hearing Moshe talk about it makes it a lot more comical than how I’m poorly describing it. He can be extremely intelligent in some of his bits, but there’s also a goofier side to him as well.

The very end of the stand-up ends on a weird but funny note. Moshe is confronted by a heckler that he looks like a French mime. He takes off his glasses and plays along and does a series of mime acts, along with the fake heckler. Strange way to end the act but funny nonetheless. After seeing this and other appearances of Moshe, I’m looking forward to more from him.