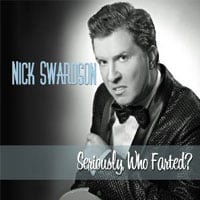 Some of you know Nick Swardson as the gay roller-skating prostitute on Reno 911 or the guy from Grandma’s Boy but he’s also a comedian. His follow-up “Seriously, Who Farted?” to “Party” was released back in October 2009 and I’ve been meaning to check this out, just never got around to it until now. I’m glad I finally gave Nick’s stand-up a chance because it’s some funny stuff!


This was recorded (and filmed for DVD) in Austin, Texas. Nick covers a lot of ground but mainly talks about partying, boozing, how booze is amazing, weed, how people think he’s gay, sex, UFC and some other things. But mainly Nick’s stand-ups will appeal to college students. I guess people that like the movie Grandma’s Boy will like his stand-up. I still haven’t seen that movie by the way. I’m skeptical about a comedy when it was in and out of a theater in a matter of a week.