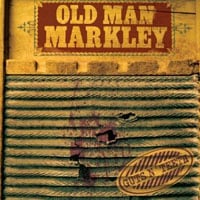 Yee-fucking-haw! Old Man Markley’s debut on Fat Wreck Chords is a big departure from the usual at the punk rock label, which is a good thing I believe. Punk rock is great but sometimes you need to mix it up and Old Man Markley certainly does that. If you like cow-punk, bluegrass, alt-country and other similar styles, you’re in for a treat!

OMM play punky bluegrass that makes you feel like dancing a jig with your special lady (or cowboy, whatever is your thing). The opening track & first single from Guts N’ Teeth “For Better For Worse” will suck you into the album or make you immediately hate it. It depends how open your music taste is. I’ll admit, I probably would have hated this 10 years ago. Since my style of music has expanded over the years, I really like this band and enjoyed their album. The singing is top notch and isn’t irritating like some country/bluegrass acts tend to me. One track that stands out for me is track 5 “Do Me Like You Do” which features female vocals from autoharp player Annie Detemple and lead vocals Johnny Carey. Annie’s vocals were great on that track, and actually sounds kind of sexy as well. She should sing on more tracks! The band doesn’t play just bluegrass, which is probably why the band is a good fit for Fat Wreck Chords. There’s hints of punk, folk rock, country and rockabilly as well.

Old Man Markley’s Guts N Teeth isn’t an album I thought I would like but I ended up loving it. The energy & speed this album brings, I just can’t wait to see the band live. They seem like they would have the same intensity as a Flogging Molly or Gogol Bordello show. I’d suggest checking out some songs online first before getting this, but if you like what you hear, I highly recommend this album!

Bottom Line: A nice departure from the usual Fat Wreck sound
Notable Tracks: For Better For Worse, At The Bottom, Do Me Like You Do, Letterman
Overall Rating: