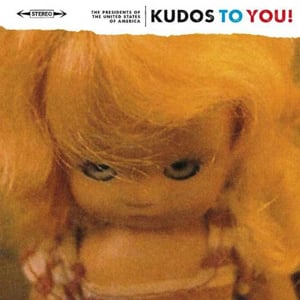 From the band that brought you such seminal 90’s chart topping hits such as “Lump” and “Peaches” comes the 7th studio album titled “Kudos To You!”. Funded via funds from fans with a PledgeMusic campaign, PUSA have once again unleashed their powerpunkpoprock genius upon the musical universe.

Since most of that musical universe only believes that the Presidents of the United States of America have only released one album, which contained only “Lump” and “Peaches”, I would like to inform you as I mentioned once before…this is the Presidents’ seventh studio album (counting “Pure Frosting”) and their sixth album released since their self-titled debut.

“Kudos To You!” is a mix of mostly new songs as well as some re-recorded Chris Ballew side-project songs turned into Presidents songs. This definitely gives the album a sound reminiscent of their first two albums. It’s heavy on the guitar and the rock is hard. The bands’ obsession with insects also continues with tracks like “Slow Slow Fly”, “Electric Spider” and “Flea vs Mite”.

One of the things that I have always loved about the Presidents is their ability to create such great visuals and creative imagery with the songwriting. Whether it’s a song about a volcano about to explode, the Death Star or an insect battle between a flea and a mite, it’s what really drew me to the Presidents in the first place and what continues to keep myself and the band’s fans coming back for more. “Kudos To You!” is chock full of those visuals as expected. That just means that it’s another great PUSA album. Who would have thought that a song about a Ford Crown Victoria could be so fun and exciting?!

I, for one, am glad that the Presidents have decided to continue to record new music for all of these years. I have been a fan of the band since the first time their self-titled album hit my Discman. I drool with anticipation upon news of a new Presidents album being released, waiting anxiously to be sonically transported to another world. “Kudos To You!” picks up where “These Are The Good Times People” and each previous release let off…with a fun musical romp through muddy truck stops, bug cities and little blind spiders driving dune buggies in the sun that keeps we wanting more. Selfish, I know.

If you’ve all but forgotten about this Seattle grunge-era band that wasn’t grunge at all, do yourself a big favor and take a listen to “Kudos To You!”. With the lame duck era continuing to drag on in the sorry rock world, the Presidents of the United States of America will surely be a welcomed breath of fresh air. For those who are still fans of the Presidents, this you already know so for this album all that I have to say is that that’s all I have to say about that. Oh, and “Kudos To You!” is kitty and froggy approved.

Bottom Line: Yet another rowdy romp through 13 songs in a way that only the Presidents can take you on. Fans of early Presidents stuff will be pleased. New fans take note…you don’t always have to be serious to seriously rock out.
Notable Tracks: Slow Slow Fly, Electric Spider, Crown Victoria, Flea vs Mite, Innocent Bird
Overall Rating:

For anyone that would like to pledge towards the album and receive some cool free swag, go here.