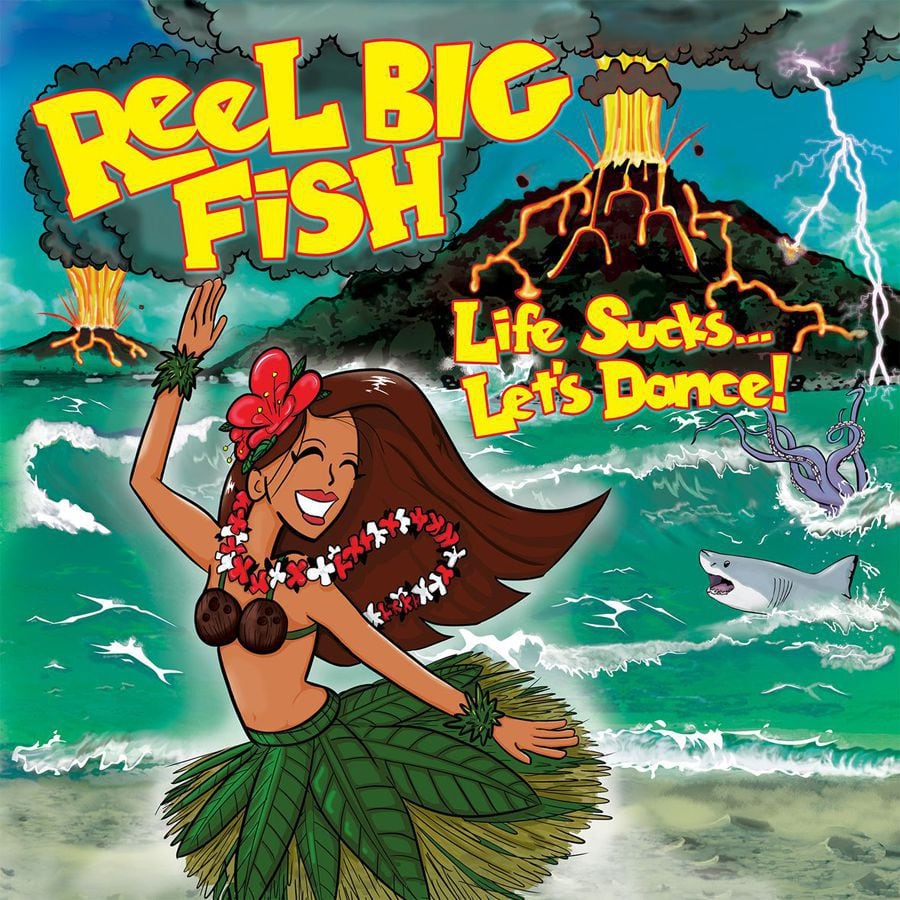 It’s been six long years since the release of Reel Big Fish’s last full-length release…2012’s stellar “Candy Coated Fury”. The band finally decided to take some time off from constantly touring the globe to but some songs to digital wavelengths and release another stellar full-length release aptly titled “Life Sucks…Let’s Dance!”.

I’m going to start off by saying that I may be somewhat biased when it comes to Reel Big Fish nowadays but that’s ok because life sucks and I’ll write what I want to write. There was a time when Reel Big Fish was going in a different artistic direction as a band with a wider range of influences and veered away from what I personally loved from them as a band…fun and danceable third wave ska punk. I still went and seen them live every year, sometimes three or four times a year including Warped Tour…in which it seemed they were on every single year. Then there was the release of the Forces of Evil stuff, a side-project of lead singer Aaron Barrett’s with members of disbanded ska punk bands like Jeffries Fan Club and the Scholars. Selfishly, I thought that the “Friend of Foe?” album would have made a great Reel Big Fish follow up album because I wanted more ska ska ska. Ten years later, most of the members of the Forces of Evil are full time members of Reel Big Fish, thus the reason for two consecutive amazingly awesome Reel Big Fish albums.

Anyway, enough blogging for me…time for a review. First of all, “Life Sucks…Let’s Dance” is pure fun with a little bit of pissed off attitude and sarcasm. It feels like a mix of “Turn The Radio Off” and “Monkeys For Nothin’…” with a very danceable ska punk mix coupled with a band that are much more mature, experienced and confident…as was evident on “Monkeys…”. “Life Sucks…Let’s Dance!” is not only the album title but the first track that sums up the entirety of the album…music helps you escape the harsh realities of life and this album with take you away to a much better and brighter place for forty minutes. The second track “Pissed Off” brings the snark that RBF is known for to the forefront as they happily threaten someone who wronged them to the most two-tone song on the album.

The first single released by the band is the third track titled “You Can’t Have All Of Me” and is just a great pure third wave ska song about everyone always wanting more and more out of an individual. We all need a little time for ourselves. “Tongue Tied And Tipsy Too” is one of the faster punk influenced tracks on the album that gives Mr. Barrett some guitar shredding time to a furious punk rock beat. It’s one of the few Reel Big Fish songs that are void of horns but a stellar track nonetheless.

A track that stood out to me due to its ridiculous title is “Bob Marley’s Toe” and ended up being one of my favorite tracks on the album. With a traditional reggae sound, the band pays tribute to the legacy of Bob Marley in their own tongue-in-cheek way. It’s goofy and touching at the same time and I wouldn’t expect it from anyone else.

Following up “Bob Marley’s Toe” are some surprising tracks which you can somewhat consider Forces Of Evil covers or merely re-recordings. From the extremely rare and hard to find FOE EP “Four Song Obituary”, we get some new recordings under the RBF catalog of “Ska Show” and “The Good Old Days”. As one would expect, the new versions sound great and it’s good to see some song crossover from the Forces Of Evil days. Now I’m going to cross my fingers for a re-recording of “Fight For Our Right To Skank”, please and thank you!

“Life Sucks…Let’s Dance!” ends with the band throwing in an instrumental number as the last track ala “Victory Over Peter Bones” from “Why Do They Rock So Hard” that’s titled “Walter’s Highlife” and is dedicated to Aaron Barrett’s dog Walter who lives the highlife as he travels everywhere the band goes.

When it comes to Reel Big Fish I think of having a good time with fun danceable music mixed in with some punk rock ethos and songs that folks of all ages can relate to. While the band has been around and seen everything one can see in the ska and punk scene, they’ve almost always had a positive attitude and message to spread. “Life Sucks…Let’s Party!” is that enjoyable vacation from reality that takes you away to a place of entertainment and joy. Reel Big Fish are one of the bands that have defined the third wave of ska music and they continue to wear that on their sleeves for everyone to see, damn what others think about that. This lineup continues to impress and is easily one of the strongest Reel Big Fish albums to date and I don’t see them slowing down anytime soon.

Bottom Line: This album is just pure ska joy from a solid consistent lineup from a band that had some upheaval in the past. “Life Sucks…Let’s Dance!” will have you dancing around in your checkered Vans in no time flat or you just don’t have soul.
Notable Tracks: Bob Marley’s Toe, Life Sucks…Let’s Dance!, Ska Show, The Good Old Days, You Can’t Have All Of Me, Tongue Tied And Tipsy Too
Overall Rating: