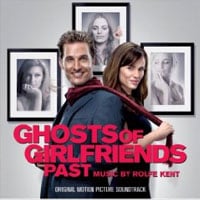 The latest predictable Matthew McConaughey romantic comedy is out of movie theaters and on video already. I don’t think I’ll see this one, unless I’m forced to. Ghosts of Girlfriends Past is based on Charles Dickens’ A Christmas Carol, only the people that visit Connor Mead aren’t actually the dead people but forms of his former girlfriends. LAME!

Rolf Kent provides the score for the film. He has composed such scores as Sideways, Wedding Crashers, About Schmidt, Thank you for Smoking and lots of others. I think About Schmidt score is my favorite from Kent. This one has 24 tracks, and most of them are under 2 minutes. How very punk rock. For the most part, the tracks are quiet and aren’t really noticeable. It’s quiet background noise to me. I can see this being good while reading a book. Since I haven’t seen the movie, I’m not sure how it fits. The tracks range from jazz numbers (“Uncle Wayne’s Room”), to spooky tracks (“Uncle Wayne’s Apparation”) to sweet resolution music (“Jenny & Connor in the Snow”). For the most part, Kent uses piano, and light strings for a playful background score. I didn’t mind this score but it could have been better.