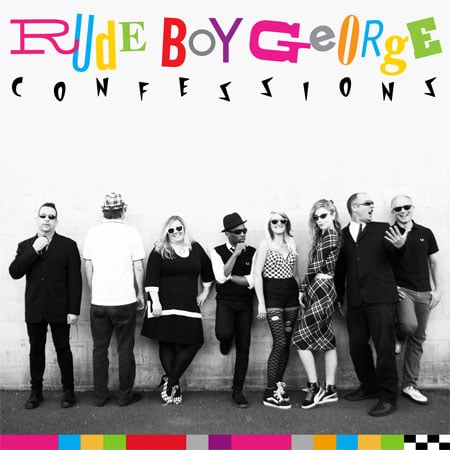 The new wave loving ska band, Rude Boy George, are about to release their first full-length album and it’s everything I hoped it would be! It’s ’80s songs and ska music, what’s not to like!? So go get your leg warmers, your checkered sunglasses and your slap bracelets and party to the ’80s covers from Rude Boy George. Bitchin’!

It’s hard reviewing something when you’re friends with the band but thankfully, there’s no need to sugar coat anything. Confessions is nostalgic good fun and one of my favorite albums of the year! For those that don’t know, Rude Boy George consists of members of Bigger Thomas, Across The Aisle and former Moon Records employee Stephen Shafer. Roger from Bigger Thomas and Megg from Across the Aisle share vocal duties and sometime get their own spotlight. Sometimes, songs require female vocals so I like the dual vocals approach.

“The Metro” is the first track off the full-length, and time warps you back to 1981 when Berlin originally did the song. Megg does a beautiful job with the singing, and I love the baseline by Marc. It’s very Mirror in the Bathroom-ish and I believe that’s where they got some of the inspiration for it. When Rude Boy George got together, they were lacking horns but now have a sax player (Jackie from Across The Aisle). It certainly helps with a lot of the 80s songs that have sax. I’m still waiting for a Huey Lewis and the News cover but Huey isn’t really considered new wave is he? “Always Something There To Remind Me” is next and the heavy sax and keyboard playing is noticeably right away. Roger sings most of this song, with others join in during the chorus. If the band played the song from start to finish, you’re legs would be tired from skankin’ around.

The next 3 songs you might be familiar with if you bought the band’s first EP. Since the members of the band have rotated in and out of the lineup, I believe these songs have been re-recorded though. Or at least some of the songs sound different to me but what the hell do I know. There’s “Don’t Change” by INXS, “Keep Feeling Fascination” by The Human League and “Talking In Your Sleep” by The Romantics. While I like those songs, I was hoping for some other new songs though. The last portion of the album is brand new stuff and lots of songs to like. If you like the slower tunes, there’s “Eyes Without A Face,” originally by Billy Idol. Most of the song contains reggae style beats but picks up at the end. RBG cover “Driving in My Car,” which they did for the Specialized 3 charity album. I never liked that Madness’ song (one of the few I suppose) but surprisingly I liked this cover. Megg adds a certain punk snarl to the tune which I like as well.

Rude Boy George may not be for everyone; like people that didn’t like these songs when they originally came out. But those who love 80s music and ska/reggae as well, you’re in for a treat! Give this band a chance, see them live, and buy their merch!

Bottom Line: 80s and ska go together like peanut butter and jelly.
Notable Tracks: The Metro, Always Something There To Remind Me, Don’t Change, Talking In Your Sleep, Sweet Dreams (Are Made Of This)
Overall Rating: