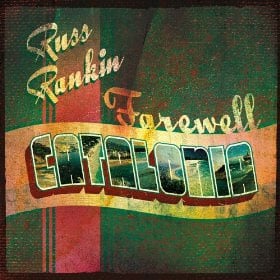 Russ Rankin’s (frontman of Good Riddance and Only Crime) debut solo album is one of the best albums I’ve heard this year! This isn’t just your typical punker turned acoustic like so many are doing now. In fact, I don’t even think there is one straight up acoustic song on here. There’s an acoustic guitar being played, but there’s also a subtle use of electric guitar, pianos/keys and other instruments used in a subtle way. If I had to compare this album to anything, I’d probably have to say this is more in tune with something that Billy Bragg or Frank Turner would put out.

The key to this album is Russ Rankin’s powerful vocals, but also the way he sings it. You just can tell he means what he sings about and knows when to raise his voice at the right moments. He’s not just some singer up there and singing and going through the motions. Another part I dig about the album is the piano parts. You don’t usually hear piano or keys in the background for punk-related songs.

The opening track “Pushing Daisies” is a good one to start off and one of my favorites off the album. Just like his other bands, he mixes politics (“Flesh and Bone,” “Indivisible”) and personal stuff (“Departures,” “Shine”) into his songs. The songs are quite catchy, and sometimes touching and beautiful. This would make for a great break-up album and I mean that in a good way. With all that said, the songs can blend together at times. That might be my only complaint for this release. They sound too alike. But that could just be a nitpick from me.

I don’t really listen to Good Riddance and maybe I should, but this is a solid debut from Russ Rankin. I thought this might be something generic but it’s certainly not. And who would have thought a NJ Devils fan could write such great songs!

Bottom Line: For fans of Billy Bragg and Frank Turner, and of course Good Riddance
Notable Tracks: Pushing Daisies, Departures, This Is What We Get, Indivisible
Overall Rating: