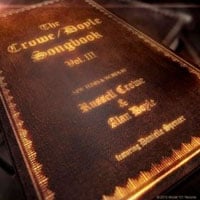 Actor Russell Crowe and Alan Doyle of Great Big Sea have been friends and collaborators for awhile. Both have written songs for each other’s bands and Alan and Russell co-starred together in Robin Hood in 2010. Now they have an album out together called Crowe and Doyle Songbook Vol. III. The album features 9 tracks and then the acoustic demo versions of those tracks immediately following those 9 tracks.


As much as Russell Crowe’s name is on this album, his wife Danielle Spencer’s name should have been included as well. She and Alan Doyle sing duet for the most part, with Russell singing backup or secondary vocals. Doyle’s vocals are more distinguished or noticeable so maybe that’s why I think I hear him more than Crowe?

“Too Far Gone” opens up the album nicely and I really like the folk rock-iness of the songs. “Love Is Impossible” is more upbeat in the chorus and one of the stand-outs I think. “Perfect In Your Eyes” is another upbeat rock song that I really enjoyed. I like the added touch of some keyboards in there as well. “The Killing” is perhaps my favorite track because it’s got an old Americana, country-western feel to it. It feels like Russell wrote this one on the set of 3:10 to Yuma, if he even did write this. But that’s the sense I get when hearing this one. It’s strange to say that I like something that Russell Crowe has done musically but this album is very solid. Usually when I think of Crowe and music, I can’t help but think of South Park’s “Fightin’ Around The World” song spoof on him. While Crowe is heard and playing in the group, this album really belongs to Alan Doyle and Danielle Spencer. I’m looking forward to more albums like this.

Bottom Line: An interesting but effective collaboration between Crowe, Doyle, and Spencer.
Notable Tracks: Too Far Gone, Love Is Impossible, Perfect in Your Eyes, The Killing
Overall Rating: