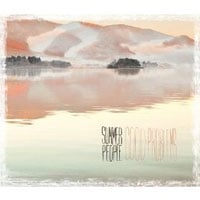 Eight-piece Summer People seem to have eight different visions for the band. While the headiness of Flaming Lips is a continual influence, there are eclectic flourishes that range from feel-good psychedelic indie to angular post-punk and even drone rock.

The album starts off strong with one of those hippy-dippy, sit-around-the-campfire jamborees that made Edward Sharpe & the Magnetic Zeros a household name. Quickly veering into other directions, the album covers aforementioned Flaming Lips-like indie (“Shallow Water People”, “For Giving In”), cute Shins-like ditties (“The Other Side”), down n’ dirty roadhouse blues (“Broken Bones”), and lengthy, atmospheric instrumentals.

The band is clearly talented and cerebral, although I’m not sure everyone has something to do. (5 or 6 people would be stretching it, but 8?). For me, the variety in style is a weakness of cohesion, but worse are the dull intros and instrumental filler that comprise their longer tunes. The album suffers irreparably from a pointless 9-minute drone mucking up the middle of the album, followed by a joyless, 6-minute lo-fi tune, both of which greatly reduced any enthusiasm I had for a straight-through listen.

This is a good band in dire need of an editor.

Bottom Line: Anything under 3 minutes is generally very good; anything over, usually way over, is joyless filler.
Notable Tracks: Two Hearted River, The Other Side
Overall Rating: