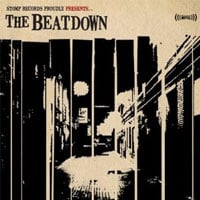 I didn’t know what to expect when I first put on the Beatdown’s self-titled album. I never heard of ‘em of them before but since Stomp Records has a good track record, I was willing to see what these guys were about. I’m happy I decided to check out The Beatdown!

The band contains members from The One Night Band and hail from the Montreal area. They play reggae and ska, mixed with some soul and other classic Jamaican music. They are very similar to bands like The Aggrolites and Deal’s Gone Band, where they have that old skinhead reggae sound. I love this type of music, especially around the summer time. It’s perfect music to drive to. The first song “It’s All Alright” is all right, but it’s not until the next song that gets me hooked in. That song is called “One Night” and it has a bit of harmonica in it; has a good beat and is quite catchy. I think that’s probably their best track on this album.

I mentioned the harmonica earlier and I really like how it’s used throughout this album. It gives their music a bit of a Bob Dylan feel to it, except it’s reggae and ska music. The Beatdown cover a few tracks like “Get Ready” and “Justice.” Their original stuff is just as good. Really not much else to say, The Beatdown are a band to watch out for because they have a great sound!

Bottom Line: For fans of the Aggrolites!
Notable Tracks: One Night, Justice, Tell Me Why
Overall Rating: