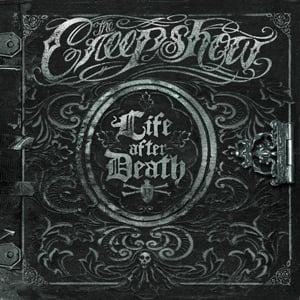 Who said that they can’t rock north of the border? Hailing from Toronto, Ontario the Creepshow have been rocking hard and melting faces since way back in ’05. Their latest album “Life After Death” continues this ongoing trend.

The world of psychobilly punk and roll seems to predominantly be a man’s world. It’s refreshing to hear a female voice powering over the standup bass and jangly guitar chords. I’m sure that the Creepshow have been compared to the Horrorpops on many occasions and they do play a similar style of music but there also some notable differences. While the Horrorpops dabble in surf rock and rock ballads at times, the Creepshow branch out to some classic rockabilly and old fashioned rock and roll Jerry Lee Lewis style. “Born To Lose” and “Last Call” are perfect examples of this, the latter can almost be considered a new musical genre unto itself…psycho-swing.

While “Life After Death” branches out into a variety of musical genres, at heart it is still an energetic and fun punkabilly album. I think that it would make a very fine driving album. Every song is fast-paced and the album flows effortlessly from track to track. The production quality is top notch and captures the feel of what a Creepshow would sound like live.

What I like the most about the Creepshow is that they seem to pick and choose various elements from pychobilly, rockabilly and punk influences and mix them in with a sense of good old fashioned rock and roll. This makes “Life After Death” and interesting album worth repeated listens.

Bottom Line: While the Creepshow may draw comparisons to bands like the Horrorpops and Tiger Army, there is much more to offer on “Life After Death”.
Notable Tracks: Can’t Wait To See You Fall, Last Call, Born To Lose, See You In Hell
Overall Rating: