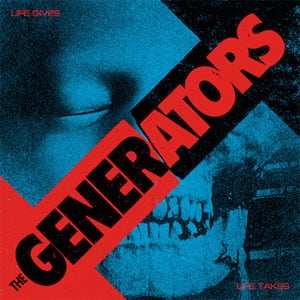 I’ve been a fan of The Generators since the first album Welcome to the End. A bunch of albums later and they still continue to be one of the most consistent punk bands in the country.


Life Gives – Life Takes is the band’s 10th release, the follow-up to the equally awesome Last of of The Pariahs from 2011. There are a total of 12 tracks and the first track, “Gotta Be A Better Way,” doesn’t skip a beat from their other albums. “Castaways” is the first song I heard from this album since the band released a lyrics video for it earlier in the Spring. The vocals in the beginning of the track remind me of 80s LA punk. The chorus part is catchy as well.

The Generators and Doug Dagger’s previous band Schleprock dabbled in some ska from time to time and you’ll hear it in the fourth track “Heartbreak Beach.” As much as I love The Generators’ punk songs, I’d like to see Doug front a side ska band with like 10 members because he’s got the voice for it. I think it would be interesting. Whenever they do the ska-ish tracks, they are always my favorite on the albums.

The songs on the rest of the album just blast through. Blink and it’s over; that’s punk rock for you! The Generators have released so many albums and at this point, you know what you’re going to get. They have gradually changed some things around but if it ain’t broke, don’t fix it. Another solid release from Doug Dagger and The Generators!