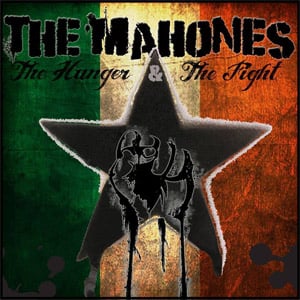 The Mahones are back with the first part of a double concept album to celebrate their upcoming 25th year of existence! You don’t see too many Irish punk bands with concept albums these days. I’ve been a fan of the Mahones for over a decade now and I always love it when they release new material. There’s a handful of Celtic bands I look forward to hearing new music from and the Mahones are one of them.


For me, my favorite albums are Draggin’ the Days and Rise Again. Not to knock the newer music but that’s just the albums that got me into the band. Their sound has gotten a lot punkier over the years and I’m fine with that, but still prefer a more of a Celtic rock sound. Less Dropkick Murphys and more Pogues meets the Replacements if you will. I think The Hunger & The Fight has accomplished that…at least Part 1 of the album has.

With The Hunger & The Fight, the band seemed to have circle back around to their roots and have slowed it down a bit. Don’t worry kids, it’s not too slow. Part 2 of the album will feature more heavier, electric Celtic punk material. The opening track “Brian Boru’s March” is a nice instrumental track that slowly builds up, and then gets a lot faster in the end. Definitely could see that as an intro song for their killer live shows. The title track “The Hunger & The Fight” is a stand out track, which features guest vocals from Tara Slone of Joydrop. I suppose Katie Kaboom can handle dual singing duties with Finny during the shows for that one.

It doesn’t take long for the band to get rowdy because they recorded a cover of the traditional song “Paddy on the Railway.” They get help from The Tosser’s Tony Duggins and having those two singing on that track just seems right to me. The special guests keep on coming because Simon Townsend (brother of Pete) plays acoustic guitar and sings on the next track, “Stars,” about Oscar Wilde. I like the storytelling aspect of the song and if I had to compare a track to the Pogues, I’d pick this one.

A Mahones album wouldn’t be complete without a drinking song (“Pint of Plain (A Drop of the Pure)”) and a love song (“Someone Saved Me”). What can I say, I enjoy both the love songs and the fast punky songs that the Mahones do. “Someone Saved Me” has to be my favorite Mahones song from this album but probably in the last 5 years as well. It’s got a catchy beat & chorus, it’s a sweet song, and if I had to pick a single for the album I’d pick this track. Definitely a track I’ll be listening to over and over.

The rest of the album is just as solid. There’s songs about The Irish Uprising, Finny’s political prisoner Uncle, another Irish traditional tune, and two covers (Van Morrison & Them’s “I Can Only Give You Everything”, Rancid’s “Last One To Die”). The awesome cover songs are bonus tracks. That would be cool if the Mahones did an entire covers album at some point. I’m talking about non-traditional songs that you’ll hear on most Celtic albums.

Part 1 of The Hunger and The Fight is perhaps one of the best albums The Mahones have done in a long time. I’ve enjoyed the last few albums but I think they just topped themselves with this one.

Bottom Line: After almost 25 years, The Mahones continue to impress and release some excellent Celtic punk music!
Notable Tracks: The Hunger and The Fight, Paddy on the Railway, Stars (Oscar Wilde), Someone Saved Me, Blood on the Streets of Dublin, Last One To Die
Overall Rating: