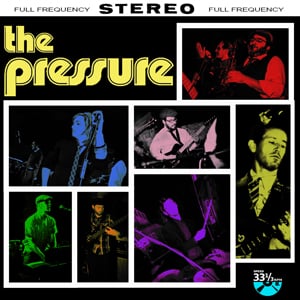 The Pressure are a full-on eight-piece traditional ska/reggae/rocksteady band hailing from a small town in Pennsylvania called Pittsburgh (you may have heard of it) just a few miles west of my location.

Now Pittsburgh has never been known as a ska hotspot, but over the years there have been quite a few pretty good ska and ska punk or ska influenced bands pop up on the scene now and again…the Distorted Penguins, Skankin’ Homer, the B-3s, the Skablins, the Cynimatics…but to my knowledge there have never truly been a traditionalist ska band influenced by the early Jamaican sounds of the 60s. When listening to the Pressure, it’s like a time warp that transports you back to the Studio One days.

Having seen the Pressure last year playing with the Slackers, I picked up a copy of their “EP” if you could call it that. With 7 songs running at almost a half an hour long, it’s more like their first foray into a full-length. Now with their first actual full-length LP it runs almost fifty minutes long. The full-length consists of a handful of tracks previously released on their EP, some with slightly different recordings as well as a half dozen new tracks including a cover of the Studio One classic “Love Me Forever” by Carlton & The Shoes.

The Pressure’s EP was one of my favorite listens last year and this full-length is surely going to follow in its tracks. Songs like “Real Horrorshow”, “Worn Cruciform” and “Kingston Review” showcase the bands full sound and early ska influences while tracks like “Devotion”, “Shoobee” and “Melissa Is Waiting” show the Pressure’s soul and dancehall influences and allow the dual male and female vocals to shine. There’s even some local flavor thrown in the mix with “Rialto Street”; a reggae song about snow closing down one of the steepest streets in Pittsburgh. For some reason I smile every time I hear this song. It’s such a neat song.

What I hope with the Pressure, is that this full-length is the first of many to come. Not only are they infusing the ‘Burgh with a deeper traditional ska and reggae influence, but they are also carrying the torch for outsiders to realize that there still is a ska community in Pittsburgh. It may not be as oversaturated and as vibrant as NYC or the OC, but it is still alive and kicking. It may have been on life support at times, but it never went away. Bands like the Pressure keep the pulse beating…hopefully for a long time to come.