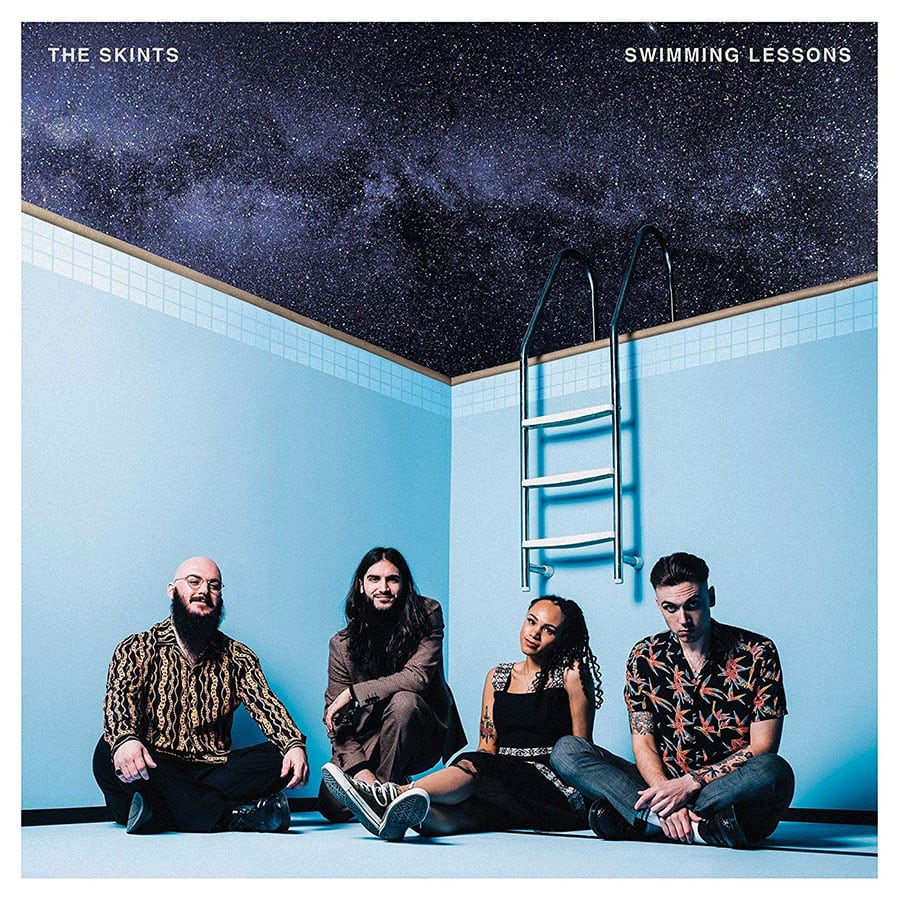 The Skints last album FM was an eye opener for me. I wasn’t too aware of the group from London, UK but as soon as that album hit, I was hooked in. Since FM had dropped, I was looking forward to see what the band were going to do with the next album. Swimming Lessons is finally here and it’s an excellent mix of various styles. This album should catapult the Skints into popularity amongst non ska/reggae fans.


The reason why I love the Skints so much, not just because the songs are catchy as hell but because they have 3 different singers in the band. Marcia and Jamie sing the majority of the songs, with Joshua singing a few tracks as well. Each person has their own style of singing and each could easily front their own bands if they wanted to, which I hope they don’t since this dynamic works so well. Seeing Marcia perform live is a sight to be seen because she plays so many instruments. On top of her singing, she plays keys, percussion, saxophone, flute, melodica, and I think guitar too? So damn talented, all of them!

The Skints’ first single “Learning to Swim” is a mixture of reggae and 90’s alternative. It’s a smashing good tune that will make you sway with Marcia’s soothing vocals one part, and then want to break something & headbang the next part. The song is so good that when the single came out, I probably played it on repeat for a few weeks. The same can be said for the entire album when I got it for review.

The following track is “Restless,” another stellar single that features label mate Protoje. The song reminds me of the early material from The Specials, especially the “haunted house” style keyboards. Protoje’s part of the song is something that I just love, and crank that up in the car. Can there be a tour of Easy Star bands that hits NY like Skints, Gentleman’s Dub Club, Protoje and Jesse Royal please? Speaking of Jesse Royal, he appears towards the end of the album with a track called “Love is the Devil.”

Things take a different turn after that with “Gets On Top,” which feels like a tropical 8-bit tune sung by Joshua. Mixing 8-bit style beats and reggae surprisingly works, especially when the Skints do it. If they do a music video for this song, it better be animated in the 8-bit style. The 8-bit keys transition to the next track, a rootsy dub-reggae tune sung by Jamie called “New Kind of Friend.”

The band’s early albums had that ska punk sound, but with this one, they have branched out into so many different styles and it all just works. You got reggae, ska/rocksteady, 90’s alternative, punk, and even a soul song. Who knows what reggae purists will think about the varying styles but whatever, go listen to something different then? “What Did I Learn Today” is another tune that blends in reggae in parts, then brings back that 90’s alternative /pop punk in the chorus part. The chorus feels like something I would hear back on the radio in the 90s, at least the good music from the 90s.

Other highlights from the new album include roots reggae song “Oh My Love,” “I’m A Fool,” and “Armageddon” featuring Runkus. As you go down the line with the tracks, every song is done in a different style and I really like that. I don’t think every band can pull this genre bending style off but the Skints pull it off flawlessly. “La La La” showcases Marcia’s singing so more, but more in a rapid fire hip-hop style and toasting. I would think the only songs I could have done without is the brief interlude song and maybe “Donkey Brain.” While Jamie sings it beautifully, I would say that’s the only song that didn’t really fit. A song that I think does fit though, is the last one which is “Stop Looking Back” and it’s another song sung by Jamie. It’s a very ‘70s soul kind of tune, and I dig it a lot. I’ll definitely be putting this track in my soul playlists when I’m in the mood for that.

The Skints have done another stellar album and exceeded my expectations. I was really looking forward to their next album after FM and Swimming Lessons is excellent. I’m not sure everybody will dig the various styles the band does with this one, but if you do, you’re going to love this album!

Bottom Line: Just when you thought FM couldn’t be topped, The Skints said yeah, give us a few years…
Notable Tracks: Learning to Swim, Restless, Gets On Top, New Kind of Friend, What Did I Learn Today, Armageddon, Love is the Devil, Stop Looking Back
Overall Rating: