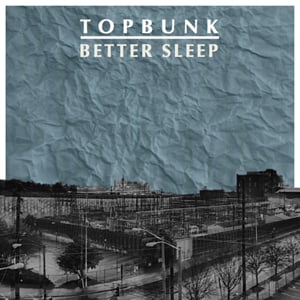 Topbunk is a two-piece (!) from Atlanta that has only been together for a year and has already released two EPs. They are either really bored or very motivated. Most likely the latter, but you never can tell.

“Better Sleep” is only four songs deep, but it is a fun listen. The sound quality is minimal, but it adds to the charm that is reminiscent of late 80’s/early 90’s punk bands that recorded wherever they could on whatever equipment they managed to steal. There’s also a lot of energy in the songs that showcase jangly fuzz guitar riffs and some unique drumming parts. I almost want to say that there is some emo influences on “Better Sleep”, but the songs are too fast and upbeat to really stake that claim.

Moving forward Topbunk has the potential to provide a very good full length album. With just the right amount of polish they could make a name for themselves in a good way.

Bottom Line: “Better Sleep” is just a small taste of hopefully more to come. Their sound is somewhat emo, but much more punk than that.
Notable Tracks: Branigan, Rosie Had A Stroke
Overall Rating: