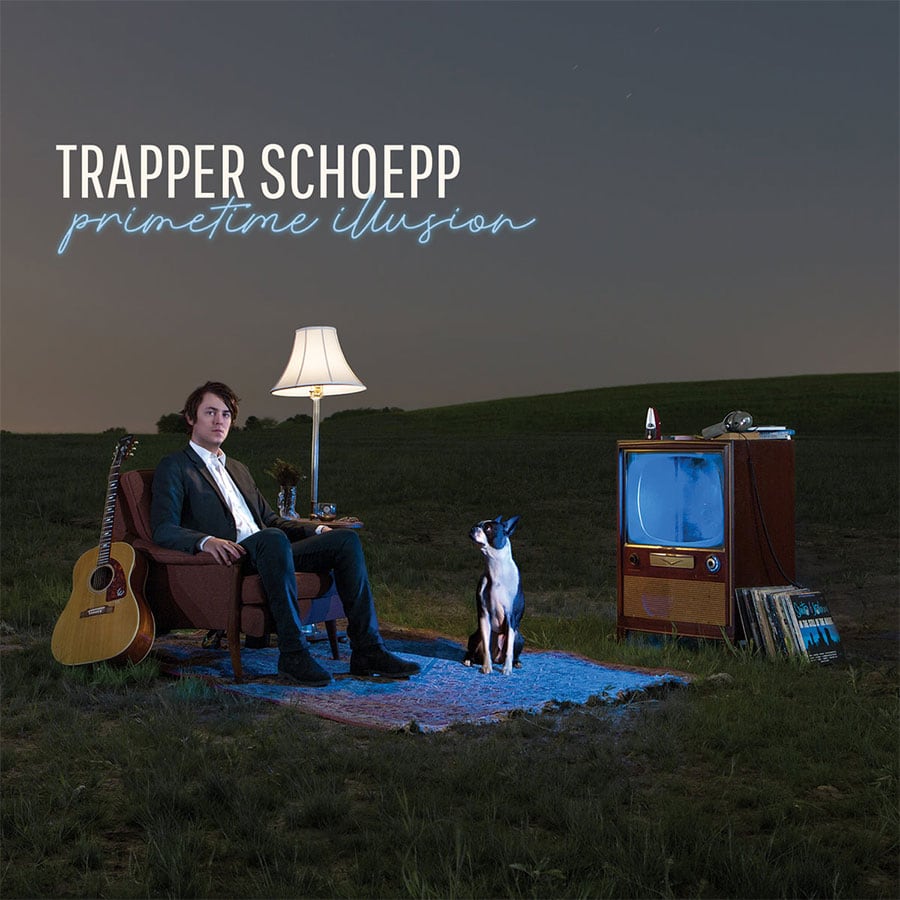 The latest Trapper Schoepp album demonstrates that the Wisconsin singer/songwriter is always exploring with different styles and trying something new. With each album that Trapper puts out, his sounds gets more expanded and the songs get more interesting. Primetime Illusion should please his current fanbase and bring in new fans as well.

Rangers & Valentine’s was Trapper’s last full-length and by far my favorite he has done so far. If “Lost Cowboy” or “Settlin’ or Sleepin’ Around” comes on my phone, when I listen to music in a shuffle, I have to listen to it. It was even cool to see Trapper play “Settlin’ or Sleepin’ Around” before the album came out for my old video series Before The Concert. So i’ve been a fan of his since his first album on Side One Dummy. It’s great to see him moving up the ranks of singer/songwriters and being a must-see live when he’s in town. He hasn’t headlined in NYC in awhile so I haven’t seen him lately. Hopefully that changes this year.

For those that don’t know, Trapper’s sound is a mix of folk rock, classic rock, a little bit of twangy Americana and a bit of a punk rocker attitude in some songs too. The musician he reminds me a lot these days is Willie Nile, another singer/songwriter who can play guitar, piano and is just an excellent storyteller. Trapper’s songs have gotten more intriguing and feel like there’s some sort of story behind each one.

“Shakedown” starts off the album nicely, and “It’s Over” sounds like a song that would be on one of his earlier albums. “Drive-Thru Divorce” is a stand-out track for the piano work. Recently, Trapper had to leave his apartment by a certain date before his European tour and the piano he wrote this album on would have to be gone. He ended up donating it, which was a nice thing to do. It’s a shame because the album is filled with lots of great piano work on it, definitely making it a bit different than his previously 2 full-lengths.

His classic rock side comes out with “Freight Train” and his single “What You Do To Her” is an important and topical song about sexual harassment and abuse. That track had Nicole Atkins sing on it as well, which was nice to hear. Another track that just screams 70’s classic rock is “All My Nines Were X’s.” Really digging the clang-clang of the guitar in the song. The last song “On, Wisconsin” was taken from the lyrics written by Bob Dylan, which was put away in some drawer for 50 years. Trapper added some melodies, chorus and got the stamp of approval from Dylan himself. So that’s pretty cool!

I really liked Trapper’s newest album and thought there were some stand-out tracks on it. I still prefer Rangers & Valentines as my favorite album from him but I like how Trapper is trying out new things each record. I kind of want to hear a full-on Americana, alt-country album from him because I think that’s a major strength to Trapper’s music. Either way, keep on rockin’ Trapper!

Bottom Line: Another stellar album from Trapper Schoepp!
Notable Tracks: Shakedown, Drive-Thru Divorce, What You Do To Her, My Comrade, On, Wisconsin
Overall Rating: