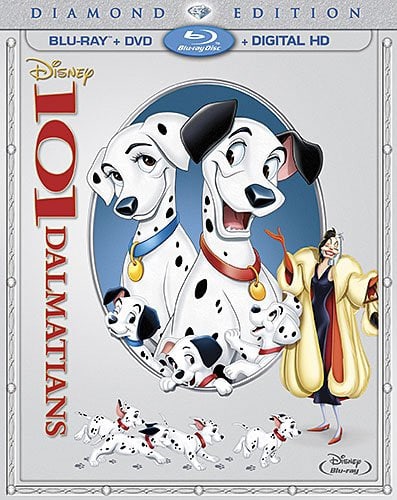 The Disney animated classic is now available on Blu-Ray and Digital HD and it looks the best it’s probably ever going to look! It’s been awhile since last seeing this movie but it still holds up well.

101 Dalmatians takes place in London and starts out with musician/songwriter Roger and his dog Pongo. Pongo is bored of the bachelor life so he tries to find the perfect dog/couple for Roger and himself from the window. Once he spots Anita and her dalmatian Perdita, he makes a dash outside for everyone to meet. One things leads to another and Roger and Anita get married, and Pongo and Perdita end up having 15 puppies. Meanwhile, Anita’s old schoolmate Cruella De Vil visits them and wants to buy the litter but Roger says no. So the crazy, fur-wearing witch ends up getting two guys to steal the puppies. Since the Police can’t do anything about the missing puppies, Pongo and Perdita take matters into their own hands…err paws, to get them back.

I can’t remember the last time I saw this movie but maybe it was back in high school or something along those lines. I didn’t remember a lot of the premise and was trying to figure out when all the other dogs were coming into the story. As I watched, my memory came back; “oh I remember this…”. The Disney classic certainly holds up well over the years. The animation is breathtaking, the story is still interesting and the characters are cute or evil as hell (if we’re talking about Cruella). I wish animated movies looked like this one. Some of the backgrounds are simply stunning and kind of want to be one of those people that goes out and buys animation cells to frame.

This is the first time that this is on Blu-Ray and it looks excellent even though it’s not widescreen. It’s almost too clear because you can see a lot of pencil marks and other animation stuff you might not see on a lower quality version. With that said, I’ll take a Blu-Ray version of this movie over any of them.

If Blu-Ray isn’t your thing (why not?), the Diamond Edition also has DVD or digital HD. Some of the special features for this edition include a new animated short about Thunderbolt, the character the pups liked to watch in the movie, plus there’s a few other featurettes. The Thunderbolt short was maybe 2 minutes long. I don’t even think it was that long. I liked the featurette “Lucky Dogs,” which was some members of the Disney team talking about making the movie including voice actress Lisa Davis (Anita). It’s interesting because they were understaffed, everything was being hand drawn and Xerox copiers can into the fray and saved the animation department at Disney! Crazy stuff! I wish that was a lot longer because I want to know more about their lives as animators. Besides those new featurettes, there’s also some old classic features you’ve seen on previous DVDs.

101 Dalmatians is one of those Disney movies that is timeless. You grew up watching it, you show it to your kids, and they’ll do the same when the time comes. It looks and sounds fantastic on Blu-Ray so be sure to get this before it goes back into the vault.