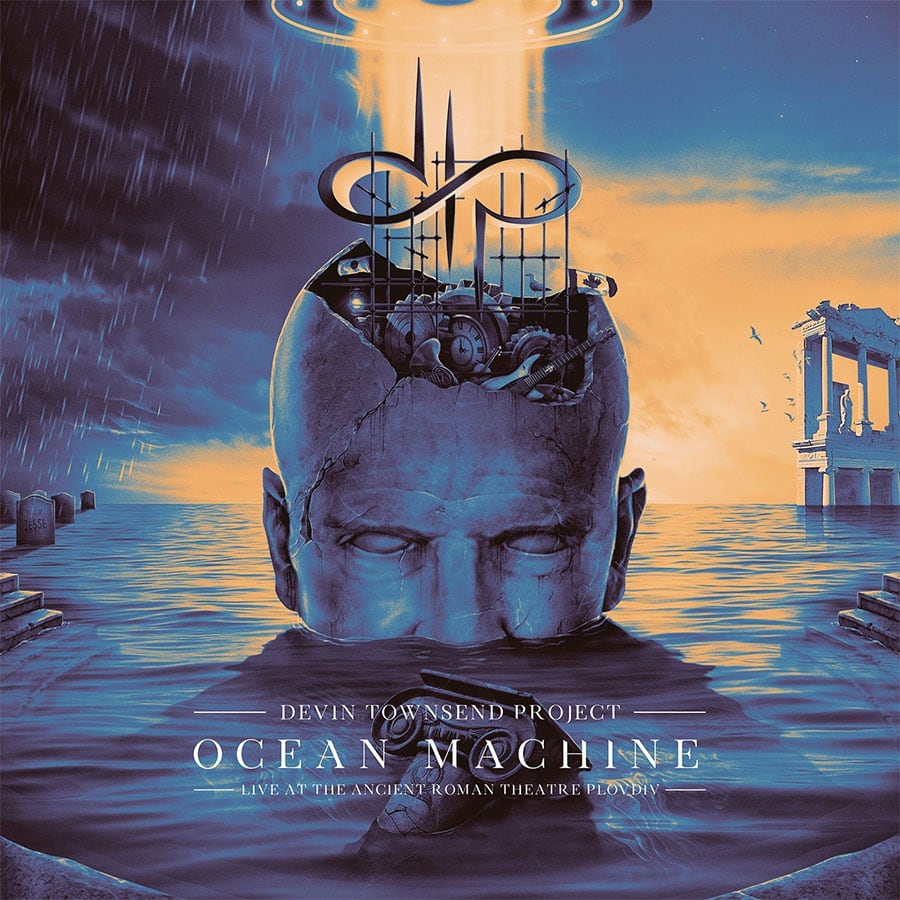 Being a North American fan of Devin Townsend is rough; always the bridesmaid never the bride. Last in line for North American preorders, and special Euro-only shows, well eventually you’ll see it on DVD! With that being said this is yet another one of those special Euro only shows, this time celebrating the 20th anniversary of the ‘Ocean Machine’ album. The Blu-ray features a complete performance of that album plus a “By Request” set accompanied by an orchestra and an extra documentary.


The Reflecting the Chaos documentary at first is seemingly routine. “Hey, we got this big show and we put a lot of work into it” but it takes a turn when discussing the dissolution of the Devin Townsend Project. To which if you hadn’t read any interviews, this could be a bit of a needle scratch moment. Just when Dev is about to go into heavy detail about it, the interview is slightly interrupted when he’s reunited with original Ocean Machine album bassist John “Squid” Harder. The rest of the documentary is spent catching up with Squid, who also played on Dev’s Punky Brewster one off album and sadly explains the passing of ‘Ocean Machine’ drummer who played on the album in addition to Squid’s battle with Multiple Sclerosis.

The live show portion opens up with the “By Request” set that features the accompaniment of the Orchestra and Choir State Opera Plovdiv, and yeah that’s a mouthful. Peppering in at least 4 songs from his last studio album Transcendence, the orchestral accompaniment lent well to songs like “Truth”, “Stormbending”, “Failure”, and “Higher”. Not exactly sure where the “By Request” portion came into play because he was pretty much playing most of these songs live with the exception of “Canada” and “A Simple Lullaby”, odds are if you’ve seen Dev, not many of these songs are out of the ordinary. It must be tough to select a set list from a 20 year 18 full length album career, but as the set says, this was by request, although it largely lacked material from the prior 6 Project era albums which he had been touring heavily behind for the past 8 years. I’d have to say the strong parts of this portion of the set would have to go to “Gaia”, “By Your Command”, “Dead Head” and “Deep Peace”, with a healthy wall of a crushing orchestra behind it. The stage production was pretty cool, aside from the visual of the orchestra, later on in the set a surprise of fire and pyro light up the scenic drop of the ancient Roman theater. One complaint as to this portion of the show, while seeing the Orchestra was great, it appeared he also had a choir lined up on the back wall, questionable camera angles barely included any of this. Considering Dev’s music is very choir vocal friendly, it would have been nice to see this and maybe a little less audience reaction shots. While on the topic of videography, probably would’ve been nice to get a few more establishing shots of how epic the venue itself looked, camera shots seemed to bounce very few fast, it would’ve been nice to revel in the atmosphere considering it was a historic one.

After the first set, they take a break to clear the orchestra, which is confusing because I thought the point of this show was the orchestral accompaniment? In a baffling move the ‘Ocean Machine’ set features no choir or orchestra, opting for backing tracks instead, at times even includes simple backing vocals I’ve seen the backing band do, but were also mysteriously not mic’d. It gets a little awkward seeing a few guitar parts not being played, while bringing back original bassist John Harder, they probably could’ve had Beav out there playing a 3rd guitar all set to cover that meat of the riffs, but they opted not.

The ‘Ocean Machine’ set followed the album order, aside from tracks he’s played live in the past, it was very cool to hear him break out the entire middle section of that album with songs like “Hide Nowhere,” “Sister,” “Voices in the Fan.” Fleshed out with the usual live tracks like “Regulator,” “Life” and “Seventh Wave,” it was great to hear seldom played songs like “Funeral,” “The Death Of Music” (which is inconspicuously left off the album’s track listing on my copy) and my personal favorite, the emotionally heavy “Bastard.” I’d have to say it was an added bonus to see John “Squid” Harder play the entire set; not letting his M.S. keep him down, very inspirational. The set closes out with “Things Beyond Things” ending an amazing 3-hour set of music.

Bottom Line: Still a solid show despite the fact this is technically his 4th live DVD of his solo career, it can be a bit of overload. While it was a bit of a bummer to not have the orchestra for Ocean Machine, it was still cool to see the album run through completely; a feat we may never see repeated.
Running Time: 03:20:30
Audio: Stereo DTS-HD Master Audio 5.1 Surround
Rating: “15 strong language” lol
Overall Rating: