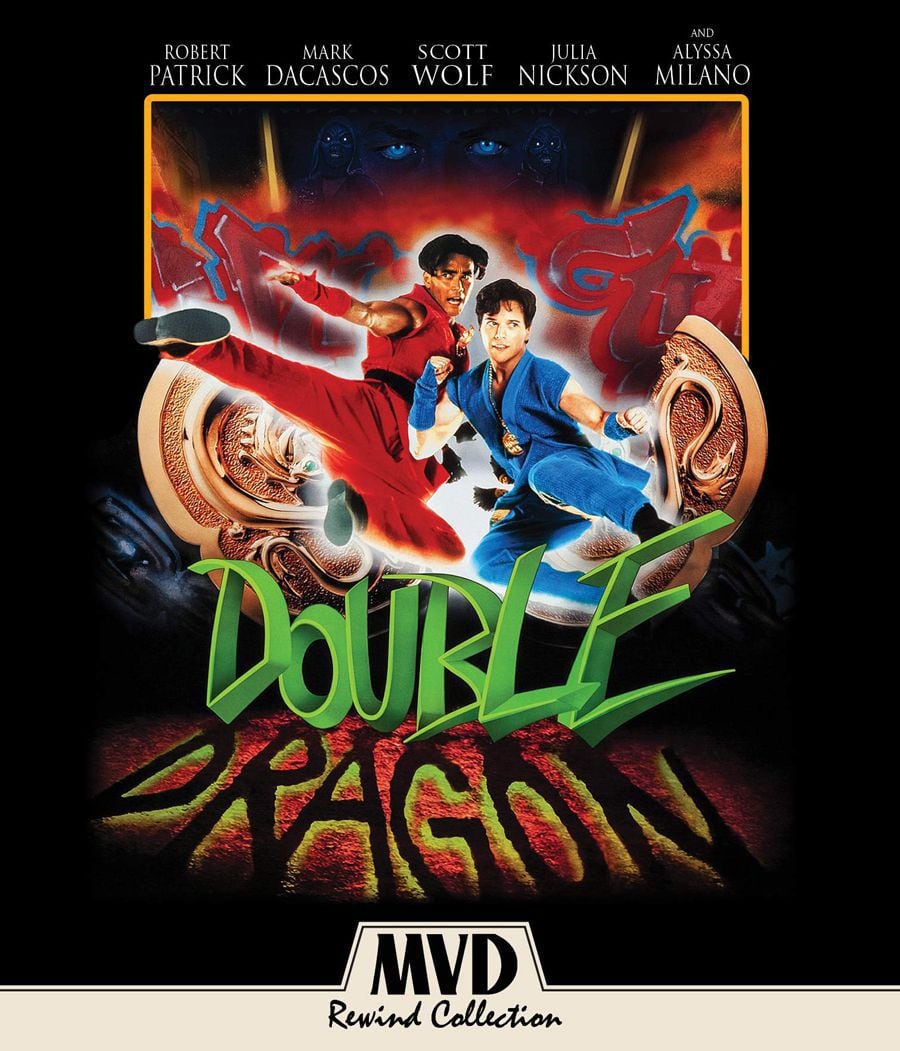 The year is 2007 and Los Angeles has been ravaged by earthquakes and tidal waves. Now known as New Angeles, the city is controlled by street gangs and crime lords. Two brothers Jimmy and Bimmy…I mean Jimmy and Billy Lee (Mark Dacascos and Scott Wolf), two street kids who train in martial arts and fight in underground tournaments find themselves in possession of one have of a mysterious dragon amulet. Unbeknownst to them, business tycoon and all-around evil guy Koga Shuko (Robert Patrick) is in possession of the other half. Having discovered the secrets of the dragon amulet and gains its mystical powers, Shuko is in search of the other half for his plans of world domination.

Originally released in 1994, “Double Dragon” is based off of the hit beat ‘em up video game series of the same name. There really wasn’t much to the story of side-scrolling beat ‘em up games back so the premise was that Billy’s girlfriend was abducted by the evil group known as the Shadow Warriors. This was basically the trend for the next few entries in the franchise. While people pan the “Double Dragon” movie for having such an off-the wall plot, there really wasn’t much to pull from story-wise in the first place.

“Double Dragon” the movie was aimed at the same target audiences as movies like “3 Ninjas” and “Teenage Mutant Ninja Turtles”…preteens that played video games, watched TGIF on TV and hung around at mall arcades on Saturdays. While chock full of humor and campiness, “Double Dragon” is still a fun movie that had me chuckling more than cringing. Robert Patrick is great as Kogo Shuko and hams up the role every single chance he gets while scowling angrily as much as he can. Alyssa Milano is as gorgeous as ever, especially in her 90s riot grrl look. There are also some simple references to the video game franchise such as the character in name only…Abobo as well as an arcade cabinet appearance. There are also some fun martial arts fight scenes paired with the goofiness of mutated characters and mystical powers like Shuko’s shadow powers.

If you go into watching “Double Dragon” as anything more a 90s kids movie based off a popular video game franchise, you’ll be disappointed. It’s campy, over-the-top and with a somewhat goofy backstory but there are some dark moments to be had such as the police force submitting to the street gangs as well as the death of Billy and Jimmy’s guardian Satori at the hands of Kogo Shuko. If not for Raul Julia’s spectacular final performance in “Street Fighter” I would rate this movie much higher than it as it would probably fall slightly below the first Mortal Kombat movie in terms of 90s video game-based movies.

Plan on gathering the kids around when watching this movie…it’ll make it more fun for everyone.

Bottom Line: While video game movies are still the bane of pop culture entertainment, “Double Dragon” didn’t take itself too seriously and makes for a fun 90s martial arts family comedy. The features on this release are a great look into the creative process of making this film as well as a touch of nostalgia for us 80s and 90s kids.