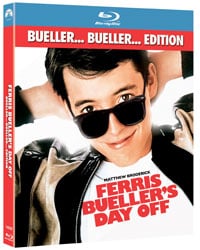 Has it been 25 years since Ferris Bueller came out?? Man, that makes me feel old. I remember seeing this in the movie theaters too! If Better Off Dead is considered one of the best 80s movies of that decade, then Ferris Bueller’s Day Off must be THE funniest movie of the 80s then? It’s a funny, smart, original, highly-quotable movie that still holds up very well to this day.


If you actually needed any explanation about the movie…but Ill provide something brief. Ferris Bueller’s Day Off follows around high school senior, Ferris Bueller (Matthew Broderick), as he decides to skip school again and go with his friends to downtown Chicago. Ferris fools his parents, the school and pretty much the entire town that he’s sick. The only two people that don’t think he’s sick is his bitchy sister Jeannie (Jennifer Grey) and the Dean at the school, Edward Rooney (Jeffrey Jones). After Ferris gets his girlfriend Sloane (Mia Sara) from school, his sick, depressed friend Cameron (Alan Ruck) and them head to Chicago for a day of fun and adventure in Cameron’s Father’s “borrowed” Ferrari. Rooney takes Ferris’ cutting personal and makes it a mission to catch Ferris Bueller once and for all but things don’t go as planned.

After all these years, I still laugh my head off at Ferris Bueller. This movie could be the most quotable movie of the 80s, or ever really. So many great lines from John Hughes. I still crack up when I see the garage guys flying in the air with the Ferrari and the sounds of John Williams playing. I don’t really think the movie has dated all that much. Some 80s movies seem really outdated but since Ferris was released in ‘86, I don’t think that’s the case with this movie. Well I guess if Ferris wore what he wore in that movie now, he’s probably be considered a stupid hipster.

If there’s one thing John Hughes knew, well besides writing and directing was picking a great cast. Matthew Broderick knocks one out of the park, Jeffrey Jones is perfect as the Dean and even Edie McClurg has Grace just seemed perfect to me. Not to mention the great chemistry between Broderick, Ruck and Sara. The movie still feels like THE Chicago movie, featuring landmarks and sights of the Windy City. Makes me want to visit there, and I’m sure the city has changed dramatically 25 years later. Included in this Blu-Ray re-release is map of where Ferris and his friends ventured off in Chicago. It’s not really a selling point but it’s still fun to look at it.

Ferris Bueller was released on Blu-Ray back in 2009, so this is basically just a re-release with nothing new added to it. But this is the first time I’m seeing it on Blu-Ray so I don’t mind seeing this. The movie looks great on Blu-Ray, and the audio seemed good to me as well. I didn’t really have any complaints with the quality. The special features that were on previous editions is still on this Blu-Ray. If you already own Ferris on Blu-Ray, this obviously isn’t worth the upgrade. This is mainly for people who don’t already own the movie.