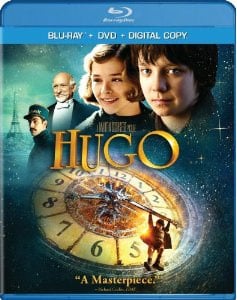 Hugo made a big splash at the Oscars and other award ceremonies. When you look at a movie like Hugo, and then Harry Potter; it makes you question whether or not this movie was nominated basically because Scorsese’s name was attached?

Hugo is set in the 1930s in Paris and is about an orphan Hugo (Asa Butterfield) who has to live with his drunken uncle in a train station fixing clocks. Hugo’s Father died in a museum fire and he hasn’t been the same since. Hugo hasn’t, not the Father obviously. His uncle disappears and Hugo has to fend for himself by stealing food and other things in the station. Hugo decides to fix an automaton his father rescued from the museum, for whatever reason. He steals parts from an old grumpy toymaker Georges (Ben Kingsley), until he’s caught and has to work for him to pay off the debt. In the meantime, he has to avoid the station inspector (Sacha Baron Cohen) who gets off from finding orphans and sending them away. Sooooo, yadda yadda yadda, this movie is about the moviemaking apparently.

After watching Hugo, I still couldn’t figure out what I just watched. It seems like it took an hour and twenty minutes to figure out that Hugo was about movie making. What happened during the time before that was just Sacha Baron Cohen walking around in a metal leg brace trying to capture kids, Ben Kingsley being a grumpy dick, and this kid Hugo stealing things to play with some mechanical creepy robot man.

By the time I knew what this movie was really about, I just didn’t really care. Maybe I wasn’t in the right frame of mind when watching this? Who knows. I will say I did enjoy watching Sacha Baron Cohen on screen, and loved the look of the movie. But cinematography, special effects and other little things, I didn’t really care much for this. I know this is based on The Invention of Hugo Cabret but something just felt off about the movie. If Scorsese just wanted to make a movie about movies, then why not make one tells us this is about movies from the beginning. I liked the second half of the movie better than the first, but I was just discourage by then to give a flying crap.

Like I said before, the film looks amazing and I’m sure it looks awesome in 3D. If that’s your thing, I can’t stand 3D at this point and refuse to watch a 3D movie unless it’s truly worth while. There are a few extras worth watching if you liked Hugo like featurettes of the making of the movie, one on Ben Kingsley character Georges Melies, one about the mechanical creepy man, one on special effects and finally one featuring the funny Sacha Baron Cohen. I think I enjoyed watching the extras more than the movie itself.

I think if I watched Hugo again, I might like it better since I know what the damn film is about now. Who knows but I think everyone liked this movie so much since Scorsese directed it and that’s it. Honestly, I think it’s over-hyped and the people praising it probably like watching black & white films with clowns flipping pancakes in slow-motion. Fin.

Features:
Shoot The Moon: The Making Of Hugo
The Cinemagician, Georges Melies
The Mechanical Man at the Heart of Hugo
Big Effects, Small Scale
Sacha Baron Cohen: Role Of A Lifetime

Bottom Line: Not what I was expecting and definitely not Oscar-worthy (except the technical parts of the movie)
Running Time: 126 mins
Rating: PG
Extras Rating:
Overall Rating: