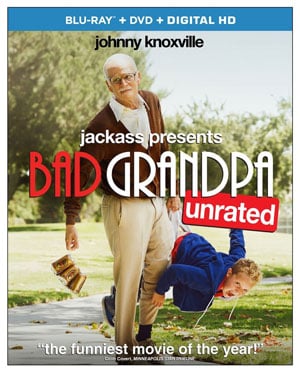 Johnny Knoxville, the King of Cringe is back! Bad Grandpa may not have all the Jackass crew back but this movie will make you laugh, cringe and gasp in horror just the same.

Bad Grandpa is a prank movie set to a storyline about Irving (Johnny Knoxville), who just lost his wife. While at the funeral, his daughter interrupts it to tell him she’s going back to jail and he has to drive his grandson Billy (Jackson Nicoll) to his deadbeat Dad. Along the way, Irving tries to ditch his grandson and partake in picking up women in male strip clubs, on the street, and just about everywhere. When it comes to finally getting rid of his grandson, Irving finally bonds with Billy and doesn’t want to give him up.

The story makes it sound like this is an actual drama but it’s quite the opposite. The story basically is there to glue all the pranks and skits together. It’s kind of done in a sloppy way but I don’t mind because a lot of the pranks are freakin hilarious. The pranks are also very awkward and makes me want to either fast forward or just hide my hands in my face.

I’ve always been a fan of Jackass, especially Johnny Knoxville and Bam. I was never a fan of Steve-O or Pontius because I just can’t stand them swallowing disgusting things (in speedos). I’m glad Knoxville decided to continue the pranks and stunts though. The movie is in a Borat-style, where there are pranks and somewhat of a storyline. Some of the funniest bits include Irving trying to sell a bed at a State Sale, Irving and Billy farting in a dinner, Irving going to a strip club during ladies night, and Billy entering a Beauty Pageant. Not all the jokes work but when they do, it’s hysterical!

The Blu-Ray special features behind the scenes, alternate takes and deleted scenes. The behind the scenes are great because you see the team preparing for the prank/stunt, test it out and then see the results. The aftermath of it is just as good because you see the people’s reaction when they realize they were in a movie. You see some of that in the end credits but this is more extended. The alternate takes were good and just different lines from the original cut. The deleted scenes were okay but could see why they were cut. It’s three scenes that were briefly seen in the movie: the street magician, billy kicking the chair and the shopping cart. The best thing among the extras is the behind the scenes stuff.

If you’re a fan of Jackass, Bad Grandpa is not to be missed. If you never saw Jackass before, well you may or may not like it. Depends on what you find funny in a movie. I thought Bad Grandpa was really funny but there were a few things that could have been better. With that said, I’m hoping for a sequel or Johnny Knoxville to continue making these types of movies.