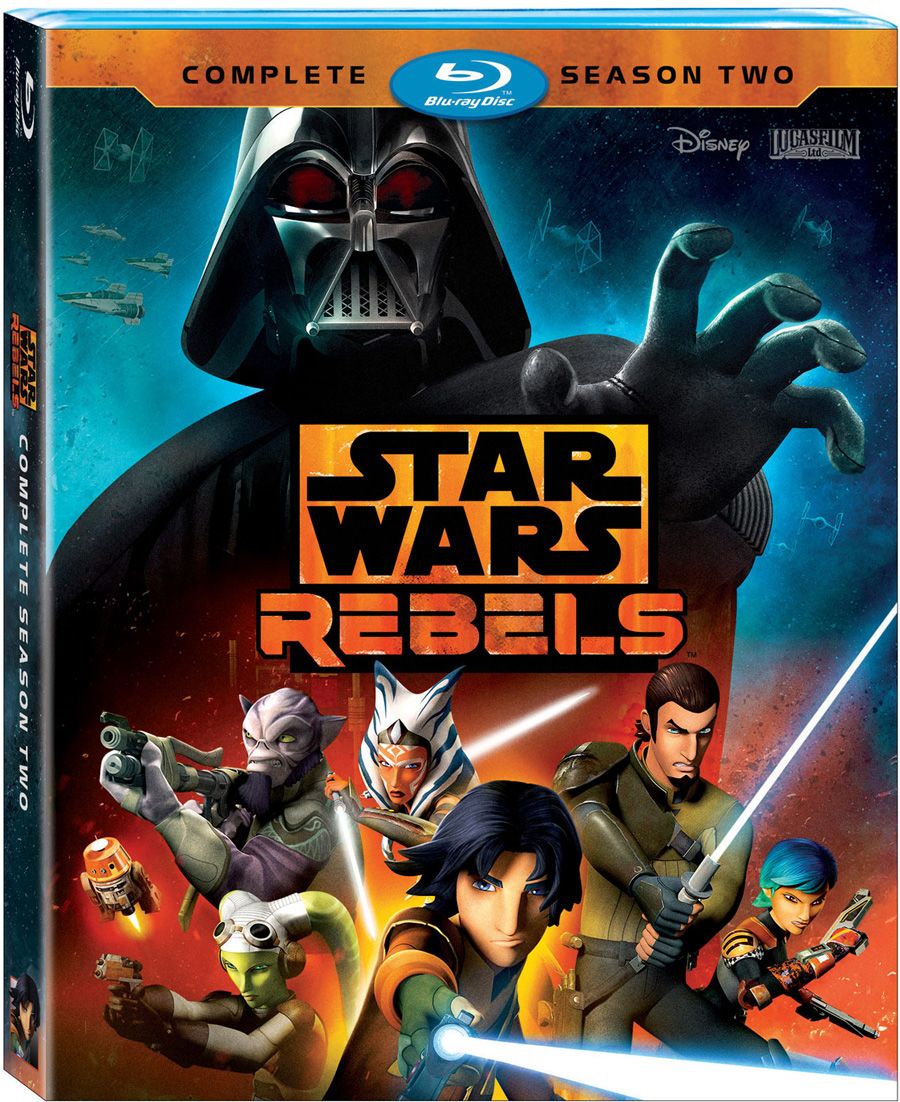 With the Empire tightening its grip on the galaxy, the crew of the Ghost band together with rebels and ex-soldiers alike to restore peace and freedom to those that the Empire has oppressed. “Star Wars Rebels: The Complete Season Two” continues on the highly popular and successful Disney XD show.

Season 2 pulls from everything that can be considered Star Wars canon nowadays. Taking place between the prequel trilogy and the original trilogy, this leaves the writers plenty of opportunity to crossover those two storylines even more. There are remnants of the Clone Wars, as well as plots that would be put forth by the Empire in the original trilogy as well as, to just about everyone’s pleasure, the return of Darth Vader to the Star Wars universe voiced by none other than James Earl Jones himself. With the reveal of Ahsoka Tano helping the rebels in the first season of “Rebels”, you know that there is inevitably going to be a meeting of teacher and student with Ahsoka and Vader destined to come to blows. And when it happens…when the meeting of two Star Wars worlds takes place, it is something to behold.

One of my favorite things about “Star Wars Rebels” is that it managed to bridge the gap between episodes 3 and 4 and do so with an original cast and crew. These characters don’t seem forced into replacing certain popular roles in the Star Wars universe. Instead these characters are given room to grow and breathe on their own. I’ve grown tired of rehashing the same old characters and storylines over and over again just with slightly different throwaway characters. It’s still fun to see some familiar faces appear over the course of season two. A young princess Leia struts her stuff in “A Princess On Lothal” as she shows her wit and cunning by helping the rebels “steal” her ships and supplies in order to help out a planet in need. Hondo Ohnaka and his delightful deceptiveness carry over from the “Clone Wars” animated series while Frank Oz returns to the voice Yoda once again. Joining the crew of the Ghost also happen to be Captain Rex and his band of lovable clone troopers. And those are just some of the recognizable cameos and role reprisals that the writers managed to fit into season 2.

What do you do in the Star Wars franchise to make it seem fresh and interesting all the while recognizable? Season 2 manages to provide the viewer with just as many brand new and original settings as it does familiar ones. The interior of a star destroyer looks as sterile and familiar as every other star destroyer/Empire ship or base but the stunning, vibrant rebel base desert planet of Atollon or the Eternia-esque birth planet of Ezra Bridger, Lothal both make their first on-screen appearances in “Star Wars Rebels”.

While to some “Star Wars Rebels” may seem like a soft reboot of the Star Wars lore, I see it more as a way to streamline many of the best part from things that are not considered canon anymore. It carries over directly from “Star Wars: The Clone Wars” and takes heavy influence from original trilogy concept art, character designs and costumes as well as various comics and books. You can see the influences that stem from things like the exceptional Dark Horse comics that were but out during the prequel trilogy days. It was definitely fun and exciting to explore more about Darth Maul and his hunt for the ultimate Sith weapon as well as exploring more background of the fan favorite Mandalorian Mercs all while pushing the story towards the eventual events of “A New Hope”. Even though that story has already been told and ingrained into fans heads for decades, “Star Wars Rebels” leaves enough open-endedness to carve out its own place in fans hearts for years to come.

Bottom Line: “Star Wars Rebels” single-handedly reinvigorated my interest in the Star Wars franchise with some of the best stories not focused around a Skywalker or a Solo.
Running Time: 485 Mins
Rating: TV Y7
Extras Rating:
Overall Rating: