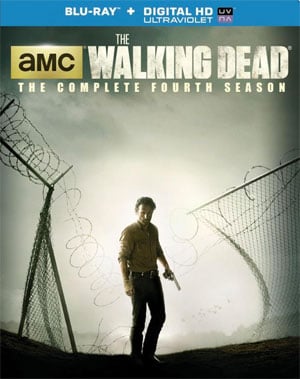 It’s Walker time! The Walking Dead: The Complete Fourth Season is now available on Blu-Ray and DVD, just in time to catch up before the fifth season premieres in October. While The season started off a bit slow, it definitely picked up steam later on.

Season 4 begins with the prison group and the remaining Woodbury residents living at the prison for a few months happily. Rick has resorted to Mr. Farmer to keep him from losing his way again and the rest of the prison group have created a council to make important decisions. With all things on this TV series, things can go to hell pretty quickly and they do by the end of the first episode. The prison group has to worry about some flu virus killing people, as well as worry about that someone twisted is feeding the Walkers, and that pesky Governor isn’t too far away either. Halfway through the season, things change a lot and sees many of the main group separate and on their own.

The 4th season of The Walking Dead started off kind of slow. The first half of the season was about the prison and the sickness that was going on. While each episode had it’s fair share of scares, gore and action (RAINING zombies!), it just felt too slow and kind of boring at times. I was happy they moved passed the sickness thing after awhile, but then again that still might be a threat down the road. I suppose they needed to trim down the excess fat at the prison.

Not like it wasn’t any surprise but the Governor is back but I felt like his arc should have ended last season. Last season’s finale was just so anti-climatic. The mid-season finale was exciting, heartbreaking and the way the third season should have ended! I loved Season 4 from that episode all the way to the cliffhanger of the finale. It’s something about Rick, Carl, Michonne, Glenn, Maggie and others on the road that makes the show much more interesting. I like the show being on the road, just going from house to house, place to place. When the group stays at one place for too long (Hershel’s farm, The Prison), it starts to become boring or stagnant in a way.

Each of the back 8 episodes are broken up into groups, with just a few characters each episode. You finally get some much needed character development in these episodes. Another thing I like about the second half of the season is Rick is back to normal. He’s not being pacifist or a farmer, he’s finally being a bad ass again. I also like that Carl finally became a grown up and doesn’t always have to be looked after, despite almost dying several times this season. I love that they added Abraham, Rosita and Eugene to the show but that usually means more characters will be leaving us in Season 5. Rick, Tyrese, Abraham, Daryl…sadly one of them of is gonna go in Season 5. My money is on Tyrese or Daryl. The never ending cycle of characters continues and will continue on.

The Blu-Ray includes a bunch of featurettes, deleted scenes, extended episodes, audio commentaries and other things to hold you over until October for the premiere of Season 5. There’s extended episodes on 3 episodes and I really didn’t notice too many additions to the episodes. I noticed the line at the end of the finale was changed from “they’re screwing with the wrong people’” to “they’re fucking with the wrong people.” There was some additional flashbacks with Rick and Hershel in the last episode. There was more scenes with the creepy girl Lizzie, but I felt we already had our fair share of her throughout the season.

There’s Inside The Walking Dead and The Making Of featurettes, which I believe are from the online video pieces that are posted after every episode. They are great little tidbits on the episodes and it’s nice to have them in high-def and all in one spot. There’s other featurettes like comic book inspirations, Hershel, and The Governor.

The Inside KNB EFX studios has Greg Nicotero and others talking about their zombie makeup and effects. That was cool to see how they did things and the stories behind the zombies. There’s a bunch of deleted scenes to watch as well. There’s some good ones like Mitch talking to Michonne about having sex with her, Lizzie finding a baby carrier on the train tracks, a kissing scene between Bob and Sacha, and some others with Rick and the Governor.

The featurettes are worth watching if you love the show and need to hold yourself over until Season 5.

Season 4 started off slow but in the end, the show found it’s footing. I still consider The Walking Dead one of my favorite shows on TV and the 4th season was just as good as the other seasons!